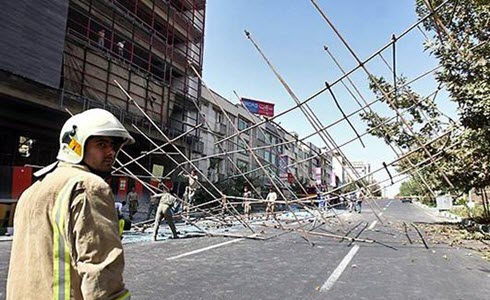 NCRI – According to the state-run ILNA News on August 23, 2017, five construction workers lose their lives at work on average every month within Iran. The latest example is the two workers who passed away in Qom Province.

A 35-year-old construction worker, who was working in a workshop on Honarestan Street located in Qom Province, lost his life as he fell to the ground. Two days before the incident, another construction worker also passed away due to a similar cause on August 20, 2017.

The spokesperson for the Association of Construction Workers, Abbas Shiri, admitted that five to six workers die or are maimed monthly in the country for various reasons, such as falling to the ground from various heights, indicating potential safety issues on the job sites.

The regime’s agent stated that even a reduction in the number of construction projects has not caused a decrease in the number of casualties. “Naturally, the drop in the number of construction [projects] shall reduce the incidents as well. However, such a prediction has not come true so far. This issue indicates that the employers and contractors of these workshops only consider advancing their projects. Therefore, the equipment, facilities, and safety procedures are not integral in the workshops,” added the regime’s agent.

In the latest report on the state of safety measures in the workplace and its upcoming actions, the Deputy of Labor Relations for the Ministry of Labor, Seyed Hassan Hefdahtan, stated that more than 1,400 people die annually due to work-related physical incidents.

The regime’s agent also added, “Having run a pathology analysis on the state of work-related incidents in Iran, we conclude that such catastrophes are worrisome in the country. According to the International Labor Organization, the death of each individual, apart from its tragedy, harms the economy directly to the amount of 1 billion Tomans ($303 thousand). In other words, the death of each person is equal to a loss of 7500 working days.”

He further stressed, “Given that the labor productivity rate in Iran is about one-quarter of the world’s rate, the incidents and deaths have annually inflicted harm to the amount of 10 thousand billion Tomans ($30.3 billion) to the country. This issue stems from our negligence in planning and preventing these accidents. The average rate of labor productivity in Japan is 7 times more than Iran’s. The Japanese labor force accounts for 98% of the capital’s resources in this country. As a result, the rate of work-related incidents is zero out of 1000 workers in Japan, whereas this figure is high in other countries, including Iran.”

At the end, the regime’s agent stated, “41 million Iranians secure their livelihood with insurance funds. The steel insurance fund has gone bankrupt and if the issue is not addressed, the rest of the insurance funds will also bust.”

Previous articleIran’s Intellectual, Cultural Suicide Under the Mullahs’ Regime
Next articleIran: The Political Prisoners in Other Prisons Join the Hunger Strike in Solidarity