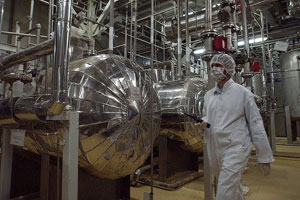 NCRI – A deadline for the Iranian regime to answer UN nuclear watchdog questions about its atomic bomb research was reached on Monday without any immediate word on whether Tehran had provided the information.

Western diplomats say Iran needs to help clear up the IAEA’s suspicions if it wants to reach a broader diplomatic deal in the separate negotiations with the United States, France, Germany, Britain, China and Russia, Reuters reported.

In recent years, the IAEA has numerously expressed concern about large explosions and testing of powerful explosive detonators at Parchin and has requested to inspect certain sections of the site.

Fearing further disclosure of mullahs attempts to obtain nuclear weapon, the Iranian regime announced on Saturday that will not give UN nuclear inspectors access to Parchin base outside Tehran.

IRGC Brigadier General Hossein Dehghan, the clerical regime’s Defense Minister, said on Saturday, (August 23): “The IAEA has conducted numerous inspections at Parchin facility and they have taken samples and have arrived at no illegal activities… as such, there is no reason for new access to Parchin because nothing has happened at Parchin since their last inspection.”

This is despite the fact that the Iranian regime has committed itself to provide answers to questions by the IAEA on the “possible military dimensions of its nuclear program” by August 25.

There are reliable information about introducing substantial changes to this area of Parchin to erase any traces of these tests.

Hassan Rouhani’s Defense Minister once again on Saturday illustrated his anger concerning the disclosure of regime’s clandestine nuclear and missile programs by the People’s Mojahedin Organization of Iran (PMOI/MEK).

These statements by regime’s Defense Minister once again demonstrates this reality that the clerical regime and the Rouhani’s government have no intention to give up the project to obtain atomic bomb and any hope for changes within this regime is but a mirage that buys time for the mullahs to obtain the nuclear bomb, and continue to carry out further aggressions and warmongerings in the region.