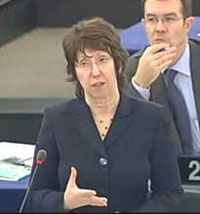 The European Union strongly condemns the executions on 9 May 2010 in the Evin prison of Iran of Shirin Alamhouli, Farzad Kamangar, Ali Haydarian, Farhad Vakili and Mehdi Eslamian.

The European Union is profoundly concerned by the repeated sentencing to death in Iran of people belonging to minorities, as well as of those who were involved in the post-election protests. The EU is opposed to the death penalty in all circumstances.

The European Union urges Iran to comply fully with its international obligations concerning the right to a fair trial and the respect of minimum standards in cases of capital punishment, and calls for an immediate halt to other imminent executions. The European Union furthermore calls on Iran to consider alternative sentences for Mrs Zeynab Jalalian and Mr Hossein Khezri, both sentenced to death for “moharebeh” (“enmity against God”) and currently in prison.

The EU calls for Iran to introduce a moratorium on the use of the death penalty, in accordance with UNGA Resolutions adopted on 18 December 2007 and 20 December 2008.

The Candidate Countries Croatia* and the former Yugoslav Republic of Macedonia*, the Countries of the Stabilisation and Association Process and potential candidates Albania, Montenegro, Serbia, and the EFTA countries Iceland, Liechtenstein and Norway, members of the European Economic Area, as well as the Republic of Moldova align themselves with this declaration.