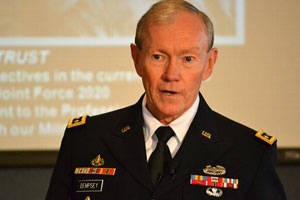 The Obama administration plans to wait to see whether Iraq forms a more inclusive government before deciding on the use of force against ISIS in that country, the top U.S. military official said.

U.S. Army General Martin Dempsey, chairman of the Joint Chiefs of Staff, said on Thursday that the U.S. would work with an inclusive Iraqi government “to deal with the ISIL threat. If Iraq does not have a political future, then we’ll have to find other partners.”

Reporting Dempsey remark at the Aspen Security Forum in Colorado Businessweek added: The comments yesterday by Army General Martin Dempsey, chairman of the Joint Chiefs of Staff, show that the U.S. isn’t rushing take direct military action to stop the Sunni group that has overrun northern and western parts of Iraq and whose troops are on the outskirts of Baghdad.

Dempsey said the U.S. should “take the longer-term view” on how to work against the Islamic State, which also goes by names including Islamic State in Iraq and the Levant, known as ISIL or ISIS.

The State Department on Thursday all but showed Iraqi Prime Minister Nouri al-Maliki the door, saying he had been particularly hard to work with.

“We had extreme frustrations with the Iraqi government, particularly over the last year,” Brett McGurk, deputy assistant secretary of state for Iraq and Iran, told the Senate Foreign Relations Committee.

“They’ve created a new parliament, and through that parliament new leaders will emerge,” he testified. “There are a handful of very capable leaders who may emerge as the next prime minister of Iraq. We’re going to have to see this unfold very rapidly over the coming days.”