Deputy Commander-In-Chief of Iran Regime’s Army: Suleimani Is the Commander of Army and IRGC Troops in Syria and Iraq 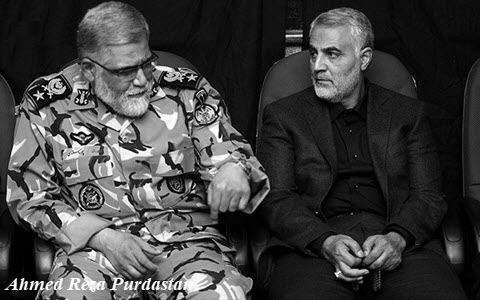 NCRI – The Deputy Commander-in-Chief of the Iranian regime’s army, Ahmed Reza Purdastan, said that Qassem Suleimani, commander of the terrorist Quds force, commands the regime’s Army and IRGC and their regional militias in Syria and Iraq.

Purdastan on Saturday, October 21, in an interview with the state-run Tasnim news agency affiliated to terrorist Quds force, revealed that the Iranian regime’s army provide air support in Syria and its special ground forces are present in Syria under the control of the Quds force.

According to the commander of the Iranian regime’s army, the Rangers of the 65th Brigade, known as the Green Hats, organized the forces of the Afghan mercenaries and militia known as “Fatimioun (Fatimid)” Brigade, in a Battalion of Malek Ashtar and commanded them.

Purdastan said that the Iranian regime’s forces use both C-130 and 747 airplanes in Syria.

Last week, Abdollah Khosrawi, commander of the IRGC’s “Fatehin” unit who was responsible for recruiting, training and sending Basij militia forces to fight alongside the forces of Bashar al-Assad’s regime against Syrian people, was killed in the Syrian conflict.

Despite the inclusion of the Revolutionary Guards in the list of terrorist groups by the US Treasury Department after the announcement of a new strategy by the US President Donald Trump about Iran, the Iranian regime continues to intervene in the region.

Previous articleIran: A Letter by Female Political Prisoner: Protesting IRGC, Is Why I Am Imprisoned
Next articleThe Terrorist Commander Behind Iran’s Middle East Expansion Now Meddling in Iraq