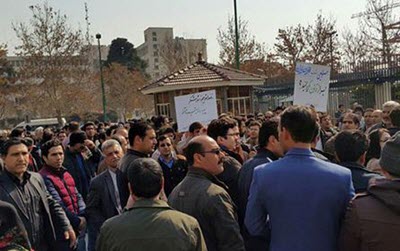 NCRI – Thousands of people held a rally in front of the Iranian Parliament on Tuesday and Wednesday.

On Wednesday, February 22nd hundreds of inspectors and experts from the Ministry of Industries and Mines staged a protest in front of the Parliament of Iran demanding permanent employment and the return to work.

The protesters said:”we are gathered here for the third time but no one listens to us.”

Another protester on Tuesday said:”we continuously referred to different departments for further follow-ups but no one bore the responsibility. However, we will not get disappointed. We will rally again in front of the Parliament in order to obtain our rights.”

Meanwhile, a group of people who have been looted by Kowsar Land Reclamation Company affiliated with the Ministry of Energy also rallied in front of the Parliament demanding their stolen land or money to be returned.

Those who have been plundered by the Caspian Financial Institution lodged protest on February 19th in front of the Parliament.

In the morning of Tuesday, February 21st more than 500 employees of Telecommunication Company of Iran rallied in front of the parliament from different parts of Iran protesting against the low salaries as well as blatant discriminations.

The protesters said:”we are fed up with Telecommunication Company! Our salary differs significantly from those who are permanently employed. Our gross salary is lower and we are not awarded bonuses as the permanent workers receive.”

One of the protesters talked about the rallies and said:”we demand signing a direct contract with Telecommunication Company. We call for the implementation of the job evaluation scheme, the removal of discrimination and the establishment of job security. The protestors believe that the mediators shall not take part in any affairs so that the rights of unions will be retained and the job security of employees will be ensured.

In the morning of Tuesday 1000 retired nurses from different parts of Iran staged a protest as medical pioneers in front of the parliament demanding their salary and receivables to rise. Most of the protesters were female nurses.

In addition to that, 400 retired employees of Razavi Khorasan Province staged a protest in front of the parliament. They were holding placards on which was written:”we, the retired people call for equality in salaries, insurance and efficiency of organizations.”

About 150 retired teachers of 2016 also protested on Tuesday carrying placards on which was written:”the year 2016 is passed but the bonus payments of the retired teachers have not yet been paid! Why?”

The teachers retired in 2016 also protested in front of the Planning and Budget Organization in Tehran.

Previous articleA State-Run Media: Iran Should Accept That the World Order Has Changed
Next articleYoung Female Engineer Committed Suicide After Being Physically Abused in Prison