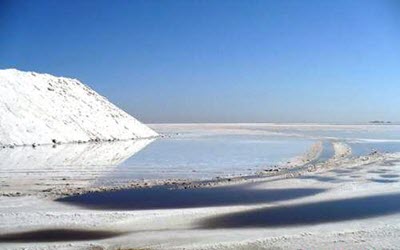 NCRI – Due to the Iranian regime’s destructive environmental policies, Qom’s Namak Lake (Salt Lake) is drying up, while its dangerous environmental consequences have already started to appear in the four neighboring provinces.

With the Salt Lake draying up, the regime’s officials speak of a disaster far beyond that of the Lake Urmia as the dust rising from Qom’s Salt Lake is going to affect one fourth of the country’s population.

The Hovz-e Soltan Salt Lake is located 40 km north of Qom and 85 km south of Tehran. Also known as Saveh Lake and Shahi Lake, Qom’s Salt Lake is 240 square kilometers and directly connected to Semnan, Tehran, Qom and Markazi (Arak) provinces. Due to its salt crystals covering a large part of the lake, it is also called Iran’s biggest natural mirror.

According to regime’s media, it seems that with its decreasing water input, the lake’s breaths are numbered and it’s spending the last days of its life.

The main reason for the lake being dried out is the construction of non-standard dams and digging unauthorized wells, decreasing the lake’s water rights and turning it into a center of dust.

The head of Qom’s Environmental Protection Agency says that the amount of dust in Qom on some days is 40 times the standard level. The dust can penetrate into human body, causing incurable diseases in the long term.

“The Salt Lake’s area is 20 times that of the city of Qom and the influx of salt dust (caused by the lake once dried-up) can be a serious threat to the people living in the city. The same dust that causes breathing difficulties for the residents of Qom and turns the sky into mustard in summers. When entering and residing inside the body, these particles disrupt delivering oxygen to body cells and play a major role in transmitting germs, various types of cancers, cardiovascular and even skin diseases and may even lead to death”, the official continues.

The head of Qom’s Environmental Protection Agency says that “the crisis here in this lake is more severe than that of the Lake Urmia, an issue which was raised a few years ago by the officials at the time. But due to the lack of follow-up and coordination among executive organizations to revive the lake in addition to the construction of a an upstream dam, the lake is being threatened by a serious crisis.”

Previous articleIran: The Far-Fetched Salary for the Regime’s ‘Chief Justice’
Next articleLIVE: Conference calling for justice in Iran and Syria