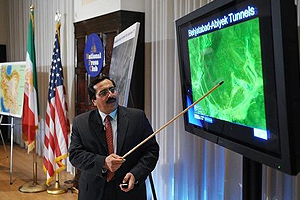 The Obama administration ought to adopt a “strategic and sensible” Iran policy that would empower the Iranian people to bring about regime change in place of the ruthless theocracy, Alireza Jafarzadeh, deputy director of the U.S. Representative Office of the National Council of Resistance of Iran (NCRI), wrote on Thursday in the Financial Times.

“August 14th marks exactly 13 years since the day I walked into a conference room at the Willard Intercontinental Hotel in Washington, DC to reveal the existence of Natanz and Arak nuclear sites in Iran for the first time. The revelation triggered an international response that has continued to this day,” Mr. Jafarzadeh wrote.

“The international community owes a huge debt of gratitude to the main Iran opposition movement, the Mujahedin-e Khalq (MEK), for its diligent and continuing efforts to unmask Tehran’s clandestine nuclear weapons program. Without it, the mullahs would have had the bomb by now.”

“Long before taking the presidency, Hassan Rouhani was in charge of the regime’s nuclear file. He had instructed Iran’s Supreme Cultural Revolution Council on November 3, 2003 to avoid admitting to or further exposing nuclear weapons activities.”

“In his memoirs, Rouhani also acknowledged the role of the Iranian opposition, saying, ‘The story behind the discovery of the Natanz site is that the Monafeqin [MEK] contributed to its discovery. They had different sources of information…they found out about some of the comings and goings in the Natanz area… they had even gotten very close, photographed the site and collected information.’”

“A flurry of additional revelations came afterwards, catching the regime entirely off guard and leaving it scrambling to obstruct and circumvent further international scrutiny.”

“In February 2003, the MEK exposed the Kala Electric Company as a front for uranium enrichment. It also unmasked laser enrichment activities at Lashkar-Abad and Lavizan-Shian sites where it later became evident that Iran had carried out nuclear weaponisation work.”

“Tehran has continually denied access to Parchin military base, a site used for a range of activities, including the testing of explosives associated with nuclear detonations.”

“The MEK originally revealed the heavily-fortified Fordow enrichment site under construction in 2005, but it was not until 2009 that Tehran finally provided access. Nearly a dozen other nuclear sites, as well as scientists, experts, and key documents have remained off limits to the IAEA.”

“Against this backdrop, there is little reason to believe that the Joint Comprehensive Plan of Action (JCPOA)- a comprehensive agreement on Iran’s nuclear programme negotiated between Iran and the five permanent members of the United Nations Security Council plus Germany and the EU in July, will lead to a substantive positive outcome.”

“The agreement allows Tehran at least 24 days advance notice of inspections, giving it the opportunity to tamper with evidence, decontaminate locations, raze buildings, remove equipment, and evade meaningful scrutiny in ways it has done many times before.”

“Examples of this abound. According to the IAEA, Tehran impeded access to the Kala Electric site for a few months in 2003, using that time to sanitize the main uranium enrichment hall. It also impeded access to Lavizan-Shian, using the time to raze the buildings and remove the topsoil before the IAEA inspections in June 2004.”

“Now, satellite images recently obtained by US intelligence agencies show that Iran has been cleaning up the Parchin site despite IAEA demands for access. Tehran’s post-JCPOA explanation about Parchin cleanup is ludicrous – and it provides a glimpse into its modus operandi in the future.”

“Thirteen years after Natanz, I fear that the JCPOA has only served to enable more of the same. The assumption that the cunning mullahs have had a sudden change of heart is wrong. John Kerry, the US Secretary of State, heaped praise in August on Rouhani and his foreign minister Javad Zarif for recognizing the benefits of cooperation.”

“But far from a change of heart, Iran’s Supreme Leader feared the translation of sanctions into political unrest, similar to the 2009 uprisings. Iran had only one objective regarding the negotiations: get sanctions relief while preserving the entire nuclear infrastructure.”

“A ‘real world’ policy on Iran recognizes Tehran’s history and true intentions. This means that Washington needs to keep up the pressure until the regime opens up its nuclear and military sites.”

“Granted, the JCPOA may keep nuclear weapons out of the mullahs’ hands in the short term. But over the long term, the ultimate solution to the nuclear crisis is tied to the death of the theocratic regime. Anything short of this is fantasy.”

“A strategic and sensible policy would empower the people to bring about a non-nuclear, secular, and democratic republic in place of the ruthless theocracy.”

“13 years ago, Iran had a few hundred centrifuges. Today, after years of negotiations, it has amassed 19,000, none of which are being destroyed as a result of the latest deal. It is not trust, but only a prudent policy of firmness commensurate with the degree of Tehran’s duplicity that will change that troubling trajectory,” he added.

Previous articleCNN poll: Most Americans want Congress to reject Iran deal
Next articleIRAN: Hundreds of thousands of girls under 15 forced into marriage in past decade

World Should Not Succumb To Iran Regime’s Nuclear Extortion