Editorial: Will Negotiating With the United States Do Iran Regime Benefit or Harm?

The idea of Iran negotiating with the US is a commonly discussed topic amongst many state-run media outlets these days, and understandably so, a reason for conflict within the Regime itself.

On one hand, the supporting group of Iranian Regime’s Supreme Leader Ali Khamenei, point their accusing finger at Hassan Rouhani and his proponents of being weak traitors who are only betraying and humiliating the administration in front of the U.S. On the other hand, Rouhani’s supporters blame Khamenei and his network for having such little understanding of foreign policy and diplomacy, and for making a business out of the mess made by sanctions.

In a Twitter post from August 4th, Trump expressed his confidence in that the increasing pressure of sanctions on Iran’s economy will surely push the regime to give into his offer of a negotiation: “Iran, and its economy, is going very bad, and fast! I will meet, or not meet, it doesn’t matter – it is up to them!”.

In Iran, some state-run media outlets have recently quoted a Kuwaiti newspaper known as Al-Jarida, on claims that Trump has apparently accepted the regime’s “7 conditions” for a negotiation. The validity of this news is certainly questionable; because if it is true, why wasn’t it announced from US or Iran themselves?!

The publication of such rumours seems to be nothing but a cheap effort to break the taboo of Iran and U.S. sitting down for a negotiation; although Amir-Abdollahian (a Parliamentary Director General for Iran’s International Affairs) rejects the notion of taboo in this regard, using examples like Iran’s former nuclear deal with the U.S., or the past talks of its terrorist Quds Force with Americans in Baghdad. However, Amir-Abdollahian fails to acknowledge the fact that the basis of negotiation is very different this time. Speaking of which, Ali Motahari (the Deputy Speaker of the regime’s parliament) also suggests: “This time, it’s not the time for negotiations”. 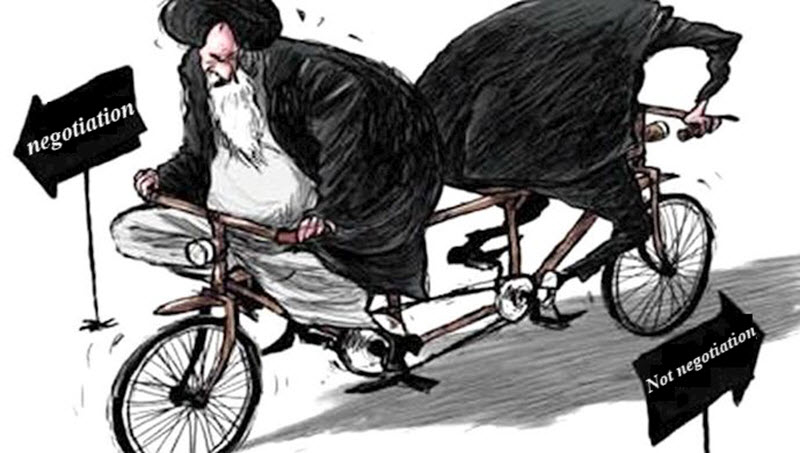 Mousavi Lari, the former Interior Minister of Khatami’s government, emphasises that “Negotiating has always been the best approach for our country”; and adds: “But when the other party is not up for an actual negotiation, talking would no longer be of any benefit for us” (Tasnim News).

What Lari is actually referring to, is the fact that any negotiations with the U.S. will only force the regime to give in.

Nevertheless, some mullahs from Rouhani’s fraction are trying to persuade Khamenei to drink this Poison Chalice of direct negotiation with U.S., using some lame religious references; for instance, a member of the regime’s Assembly of Experts named Bathaei, states: “Americans are not worse than Pharaoh” and that “If Trump says that he wants to come and have a talk with the authorities of our Islamic Republic here in Tehran, we must do as Quran says, which is to accept him and even ensure his safety, because people like him don’t know us and are ignorant!” (Khabaronline, 3 August 2018).

But the hidden agenda of these so called reformists is that by accepting a negotiation, they’re hoping to calm some of the turbulence caused by the uprisings witnessed across the country.

On 4 August, Jahan Sanat wrote in this regard: “Given the current circumstances, it is vital for the government to initiate the negotiations immediately, even if the outcome is not so desirable; because by doing so, the minimum achievement will be calming people down and getting them to walk their paths towards their desired democracy with clearer heads”.

Whether or not the negotiations take place, the regime will not be able to survive for too long; even in the best-case scenario, where negotiations do happen, the regime will have to do exactly as U.S. asks, which is to comply with a strict set of rules for their nuclear and missile programs, and to also cease their aggressive interferences within the Middle East, which they obviously can’t live without; the aftermath of which will be an ultimate humiliation for the regime, as Khamenei himself has reiterated: retreating from fighting terrorists ( a hypocritical term used by him for meddling) in neighboring countries means bringing the crisis back to the streets of Tehran.
Therefore, the fate of the regime is crystal clear, regardless of what route it takes.

More importantly, the ongoing protests in Iran which seem to have reached new heights these days, must serve as a reminder that people themselves are the final determiner of the regime’s fate. Therefore, the topic of negotiations is irrelevant after all, as people are dead serious about toppling the regime.