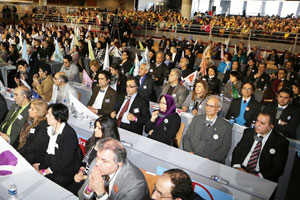 On the eve of the 35th anniversary of the Islamic Revolution that overthrew the monarchy in Iran, 300 opposition associations from all around the world gathered for the first time in Paris.

The opposition congress denounced that the regime has executed 500 people in the last six months, since the so-called moderate Rouhani took office and also denounced “the silence of the international community and especially of the United States, Europe and the UN on the barbaric and systematic violation of human rights in their country”.

Among the executed there are common criminals but also opposition figures and members of ethnic or cultural minorities, according to the associations gathered in Paris.

The convention was organized by the National Council of Resistance of Iran (NCRI) in a building of the Parisian neighborhood of La Défense and thousands of activists coming from the United States, Europe, Australia and Canada took part.

The conclusions call on the international community to “overthrow the clerical regime and establishing a democratic republic based on the separation of mosques and the State”, and they warn that “making the nuclear issue the main problem with Iran should not allow the regime to continue exporting terrorism and being a threat to the peace and safety of the region and the world.”

The document recalls that human rights violations remain constant under Rouhani, who is defined as “a continuation, someone who has been involved in every crime committed by the regime since the first day”, and as a loyal to Ali Khamenei, the Supreme Leader.

The exiled opposition stressed that Tehran has executed 120,000 people in 35 years and emphasizes than it still commits torture, deprives women of their fundamental rights, suppresses ethnic minorities and is being devoured by corruption.

According to the conclusions, “far from what the official propaganda says, the clerical regime is in an extremely vulnerable state and the Iranian society is still in an explosive situation” that would make not that hard to overthrow the regime if the pressure is increased. But it adds: “if the foreign states negotiate with Tehran under the pretext of strengthening the moderates and ignore the people’s wishes of change, this would only contribute to legitimize the regime.”

About the Geneva talks, the opposition reminds that Tehran has accepted “to step back on it nuclear projects” because of the sanctions, the economic crisis and the fear of an uprising and it warns that the second round of negotiations “will only work with a firm policy that maintains the sanctions and get assurances of the closing of all the nuclear sites to prevent the terrorists who govern the country to get access to the nuclear bomb”.

The Iranian opposition also condemns the active support of their country to the bloody Syrian dictator Bashar el-Assad, “murdering its own people” and paid homage to the 51 members of the PMOI killed last September 1st in Ashraf (Iraq).

Maryam Mirzai, a 20-year-old university activist, born in Atlanta told this meeting that “the Obama administration is being naïve negotiating a nuclear agreement with Tehran. The regime is fooling everyone with their moderate propaganda. It is sad that democracies fall into their game. The only thing they want is to get the bomb. International community must demand a radical change of regime, return of democracy or stop the talks”.