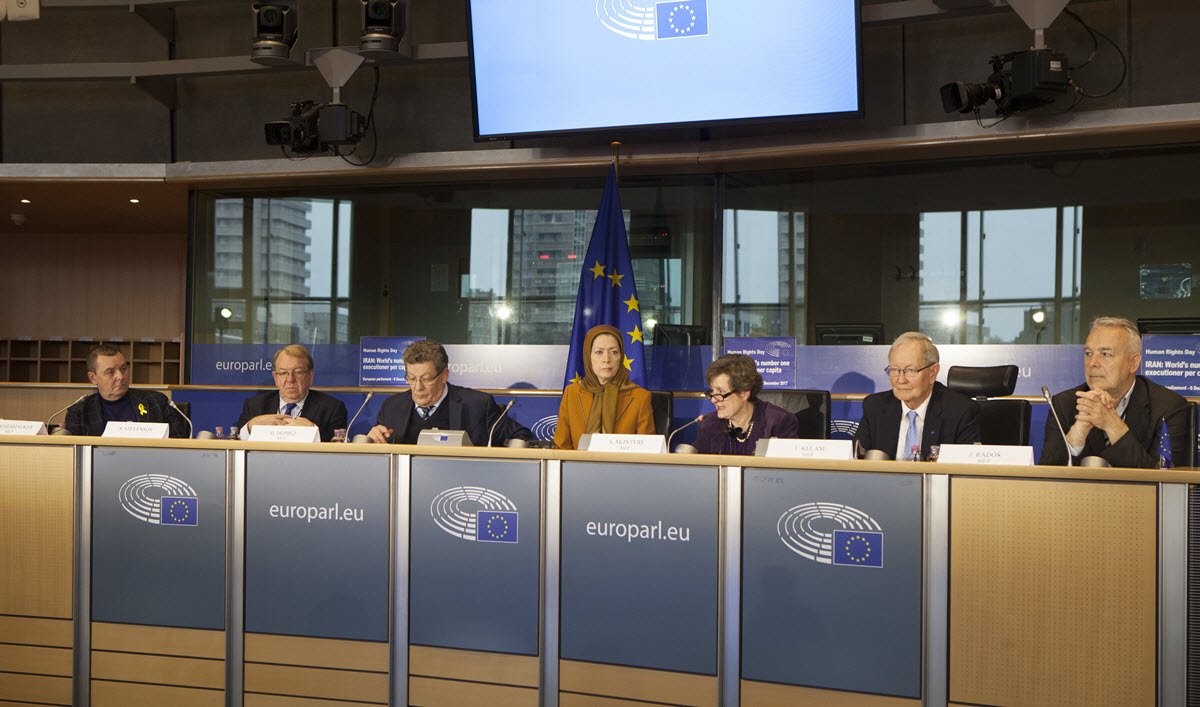 NCRI – Members of the European Parliament joined together on Wednesday 6th December to discuss Iran and the current issues that affect the European Union. Gérard Deprez, the President of Friends of a Free Iran (FOFI) and member of European Parliament, opened the conference entitled “EU Policy on Iran, Human Rights, Regional Conduct, Missile Program”.

Deprez spoke about the alarming number of executions that are taking place in Iran and emphasised that this has been going on for more than three decades. Iran, despite numerous calls to improve its human rights situation, has done nothing to change or improve it.

Deprez said that the Iranian regime has not been held accountable for its many acts of belligerence, mentioning that one of the worst crimes it has committed was the 1988 massacre in which more then 30,000 political prisoners were killed. The true nature of the regime, he said, remains the same.

With regards to the High Representative of the Union for Foreign Affairs and Security Policy Federica Mogherini’s ambivalence to Iran’s crimes, Deprez said that he feels “disappointed”. “We must give priority to human rights in our dealings with Iran”.

The president-elect of the National Council of Resistance of Iran (NCRI), Mrs. Maryam Rajavi, was introduced by Deprez who praised her for her 10-point plan that calls for a secular Iran, a free Iran and a democratic Iran that abolishes the death penalty. He called on all MEPs to support the logical and reasonable plan.

Polish politician and MEP Ryszard Czarnecki paid tribute to the people of Camp Ashraf who he described as the “symbols of Resistance” and expressed his relief that they are now, finally, safe and secure in Albania.

He expressed his disappointment in the EU High Commissioner who has turned a blind eye to Iran’s horrific human rights record. Mr. Czarnecki reminded the audience that the Iranian regime persecutes Sunnis and Christians and discriminates based on sex and punishes and executes those who hold differing political views. He said that the EU must put human rights first and said this is something it “must not compromise on”.

Mr. Czarnecki ended his speech by stating that the Iranian regime is not just the enemy of the people of Iran, but it is also the enemy of the EU and an enemy “of the democratic values that we uphold”.

Mrs. Rajavi said that the true nature of the regime becomes apparent following disasters like the recent earthquake that killed hundreds of Iranians. She said that the “extensive corruption” came to the forefront in the aftermath of the earthquake, and its reluctance to help the people of Iran was once again shocking. Instead of sending relief to help the people that were injured, those had lost their loved ones and those that had lost their homes and belongings, the Iranian government instead sent suppressive forces to ensure that the public outcry was suppressed.

Iran’s financial structure, she said, is on the brink of collapse and there are more than 100 protests held across the country every day – instigated by people who are sick of seeing the government plunder their money.

Mrs. Rajavi spoke about the social movement that was sparked by a renewed call for justice regarding the 1988 massacre. She said that the people of Iran want justice for those political activists that were killed by the cruel regime.

To ensure its survival, the Iranian regime is resorting to more and more suppression and executions and it doing its best to contain the discontent that in spilling out in society all over the country. It is also increasing its meddling abroad in an attempt to keep a grip on power.

Mrs. Rajavi called on the European Parliament to make sure that the Iranian regime is not given any more concessions because it has been proven that this policy does not work. She said that the EU has “abandoned its values” in favour of trade with Iran. Instead of dealing with trade issues, she recommended that the EU holds the Iranian regime accountable for its crimes, including the 1988 massacre. She further recommends that all trade is conditioned on an immediate halt to executions and that the IRGC is immediately evicted from all of the countries in which it is interfering, otherwise it should face harsh consequences. She also advised that the EU ensures there is a halt to Iran’s ballistic missile program, and if it does not comply, it should be excluded from the international financial system. She said that the EU needs to stand on the side of the people of Iran “who want fundamental change”.

Vice chair of the British Conservative Party and MEP, Anthea McIntyre, said that on the eve of International Human Rights Day, it was very fitting that a conference should take place to discuss the people of Iran who are being cruelly denied of what Europeans have in terms of equality and rights.
She said that the EU has forgotten, “or worse, ignored”, the atrocious crimes that have been carried out by the Iranian government. Ms. McIntyre said that it is “appalling” that Federica Mogherini went to Iran, alongside the now-ousted Robert Mugabe and the North Korean number two, to cheer on President Rouhani at his inauguration ceremony in August. She said that 18 people were executed in Iran the week that Mogherini was there.

Ms. McIntyre expressed her disgust that Mogherini called Iran a “crucial partner” to the EU. She highlighted that nothing could be further from the truth and said that other leaders, including French President Emmanuel Macron, have also agreed that Iran is not a partner for Europe.

Finally, she praised the Iranian opposition and Mrs. Rajavi for making great progress in their move to a free Iran. She said that she looks forward to seeing Mrs. Rajavi democratically elected, describing her as “brave” and “an inspiration”.

Mark Demesmaeker, an MEP from Belgium, said that he is very happy to see that the Iranian people have a democratic alternative available to them. The NCRI is ready to take over and has extensive support which is evident when considering events such as the Paris gathering earlier this year that saw more than 100,000 supporters turn up.

He said that there is no doubt that the despotic regime that is a “troublemaker and threat to the region and to the world” will soon fall. The human rights situation is deteriorating and more executions are being carried out. This is why it is all the more disappointing, he explained, that Mogherini is “obsessed” with having good relations with Iran. Mogherini’s pursuit of business with Iran is giving the EU a bad reputation. 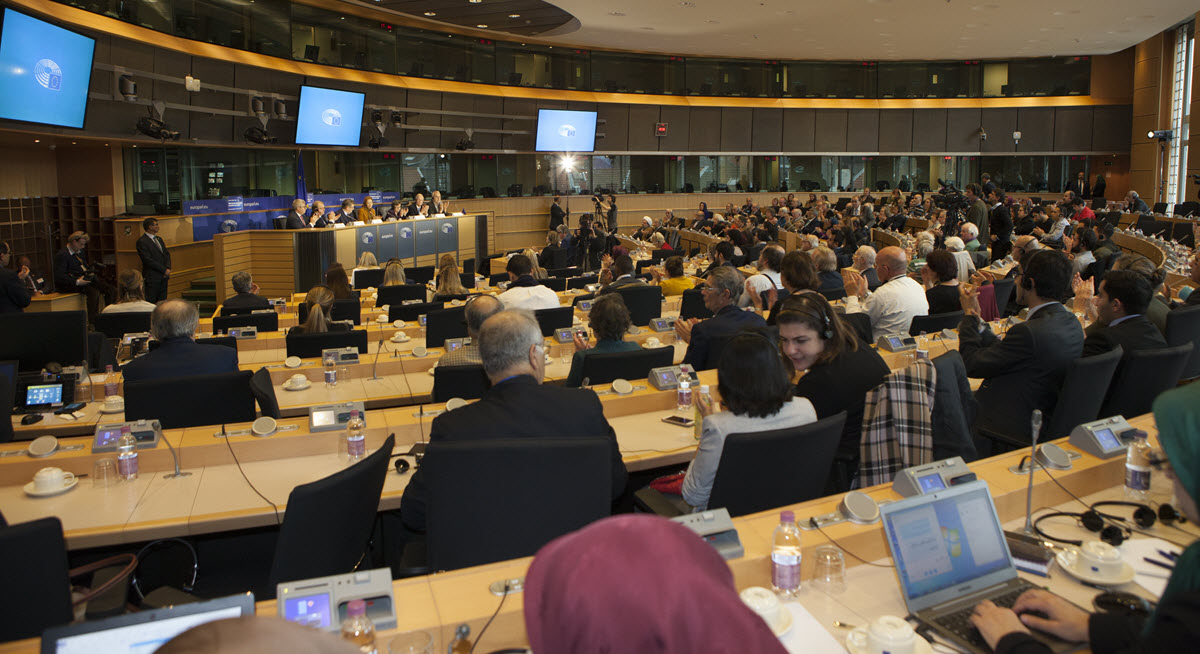 Like many of his fellow MEPs, Mr. Demesmaeker expressed his support of the opposition’s 10-point plan for a future Iran and called on others to show the same support.

Struan Stevenson, a former Conservative MEP for Scotland and ex-chairman of the Friends of a Free Iran Intergroup, is clearly astounded by Mogherini’s complacency with regards to her treatment of Iran. He emphasised that the two pillars of the Iranian regime are internal subjugation and the exporting of Islamic fundamentalism. Rouhani, described by some as “moderate”, is “in charge of a very corrupt government”. He emphasises that the current justice minister was involved in one of the worst crimes in modern history, the 1988 massacre, showing that there is no way we can move forward with the ruling regime.

Mr. Stevenson highlighted that the Iranian regime is willing to put its sectarian differences aside and work with Sunni extremist groups in order to achieve its goals. This was brought to international attention a few weeks ago when documents released by the US administration proved that Iran worked alongside al-Qaeda and Osama bin Laden. “There are no limits to its savagery.”
Anna Fotyga, an MEP from Poland, called on her colleagues to ensure that “our Western values are not forgotten”. She said that it is not acceptable for Iran to be excluded from reports on human rights. She ended her speech by paying tribute to Mrs. Rajavi and said she dreams about the day when she addresses the EU Parliament in the capacity of President of Iran.