EU Should Seek Justice for Victims of 1988 Massacre in Iran: Alejo Vidal Quadras 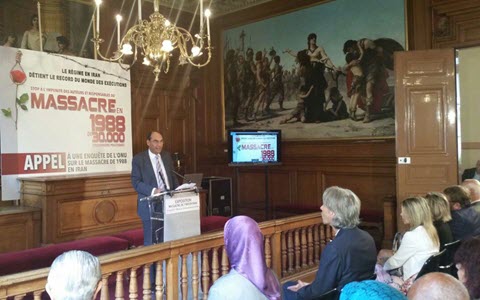 NCRI – Speaking at a conference in Paris on the sideline of an exhibition revealing horrors of 1988 massacre of political prisoners in Iran, on Thursday, Dr. Alejo Vidal Quadras, President of Brussels based NGO, In Search of Justice (ISJ), and a former Vice-President of the European Parliament called on EU countries to prioritize human rights in their relationship with Iran.

Dr. Vidal Quadras said that the campaign for justice for the victims of the 1988 massacre launched by Iranian opposition leader, Maryam Rajavi has “opened the eyes of many people even within the regime and confirmed the potential of the NCRI as a strong and credible alternative to the dictatorship of the mullahs in Iran.”

“The appeal to justice for the victims of the 1988 massacre is now a central element of the Iranian people’s resistance to regime change.”

English Translation of the text of the speech by Dr. Alejo Vidal Quadras, President of “In Search of Justice”, a Non-governmental Organization based in Brussels:

I would first like to thank Mayor Jacques Boutlaut for organizing this event today at the City Hall of the 2nd arrondissement of Paris.
This desire for historical reparation is very necessary in the context of the international campaign to do justice to the victims of the 1988 Iranian massacre when 30,000 political prisoners, mainly affiliated with the main opposition the People’s Mojahedin Organization of Iran, were executed during summer and buried in mass graves in total silence.

Today we also express our solidarity with many political prisoners who are suffering in the torture chambers of the Iranian regime, in particular, those in Gohardasht Prison who are on a hunger strike to protest the repressive measures and inhumane treatment of the regime in its prisons.

I would also like to pay tribute to 52 members of the Iranian Resistance who were executed by the regime’s agents four years ago on 1 September 2013 in Camp Ashraf. Seven others have also disappeared, including 6 women, and we still do not know what their fate has been.
Dear friends,
Unfortunately, we have witnessed too many massacres in the world in the last thirty years. In Bosnia, Ruanda, Cambodia, Sudan, to mention only a few of the most tragically famous. But the crime committed by Khomeini in 1988 is of a particularly horrible nature because it was directed against thousands of political prisoners who had either been arrested in an illegal way or even worse were in prison in final days of serving their sentence.

This massacre was therefore committed against the very foundation of the State of Right with the systematic coldness of those who despise every legal and humanitarian principle.

The campaign for justice for the victims of the 1988 massacre in Iran launched by Mrs. Maryam Rajavi has developed over the past year in Iran and also internationally.

At first, the Iranian regime tried to hide this crime against humanity. Then some mullahs tried to justify it. We saw with amazement and indignation a monster who was even proud to have organized and executed this atrocity, and at the time of these statements was Minister of Justice of the Government of the “moderate” President Rouhani. Curious moderation, no doubt.

This massacre has become a real dilemma for the regime in Iran. The public awareness campaign, led by various public figures and organizations such as yours today, opened the eyes of many people even within the regime and confirmed the potential of the NCRI as a strong and credible alternative to the dictatorship of the mullahs in Iran.

I remind you that over 800 former political prisoners who had been imprisoned by this regime and who are members of the Iranian resistance are now in Albania. They are the best witnesses to this shocking crime against humanity. They were in the camps of Ashraf and Liberty in Iraq and are now in Tirana. I talked to many of them and they conveyed to me their frightful memories of this inhuman butchery.

The appeal to justice for the victims of the 1988 massacre is now a central element of the Iranian people’s resistance to regime change.

We should not have any illusions about this totalitarian theocracy. In his first term of office, Hassan Rouhani appointed, as I told you earlier, Minister of Justice, who had been a member of the “Death Committee” of 1988. Now, in his second term, he has appointed a Minister of Justice also another perpetrator of the massacre that raged in the south of the country. The European Union has already sanctioned the new minister, Alireza Avai, for its direct participation in serious violations of human rights.

It is essential that the UN Security Council refer this case to the International Criminal Court to prosecute the perpetrators of the massacre.

I would like to take this opportunity to ask the EU and our Governments to prioritize human rights in their relationship with Iran. We cannot and should not seek economic profits by walking on the blood of thousands of innocent people.

But the regime, like all the systems built on oppression and terror, is unstable. He will leave sooner or later. There is, therefore, no opportunity to invest in this sinister and fragile theocracy. France, in accordance with its tradition, should be the leader in defending human rights, women’s rights and the campaign to end executions in Iran. This is what we expect from President Macron.

I congratulate you on this excellent exhibition in Paris today held by the Mayor of the 2nd arrondissement of Paris, who, like that of the first arrondissement two weeks ago, should be an example for the French government and for the EU.

If we believe that Europe is a community of values, we must defend them because history has shown us that when we try to buy peace and earn money at the price of our principles we end poor, unworthy and obliged to make war.

You, Mr. Mayor and all those who have collaborated with you to offer us this magnificent exhibition have understood it very well,
Let us hope that our Governments understand it as well.