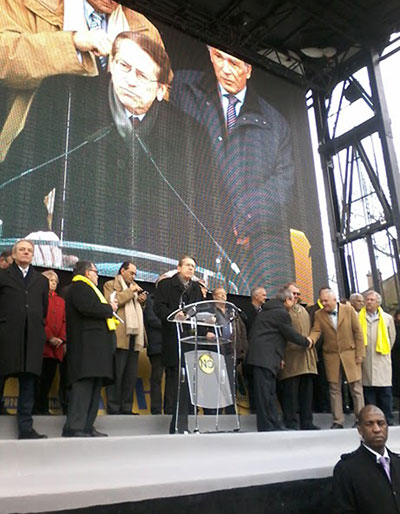 Former Italian Foreign Minister, Guilio Maria Terzi, told thousands of supporters of the Iranian opposition at the No To Rouhani rally in Paris on Thursday that European governments should not forget their principles such as respect for human rights during their dealings with Hassan Rouhani, the president of the clerical regime in Iran.

Describing the regime that Hassan Rouhani represents as a “regime that is linked to murderous militia, killing thousands of people in Syria, in Iraq, in the Middle East; that supports and funds a global terrorism network, and a regime that is still on the terrorist list in some countries in Europe,” Mr. Terzi voiced his concern about Rouhani’s visit to France and Italy.

“Two days ago, during his visit, something astonishing happened in Rome. Symbols of the Italian culture such as the Venus statue, paintings about Rome’s history, symbols of the European and Italian cultures were hidden, moved even, so that they wouldn’t offend the Iranian delegation.”

“The whole world covered that news which prompted a wave of indignation. Even inside Italian politics, the left-wing parties who don’t support the prime minister and all the other political parties protested, and I quote: ‘emphasized that it’s a shame, a mortification that art and culture can’t be understood as universal concepts.’ “

“This is an example that in our countries there are government who are ready to forget any principle in order to conduct lucrative businesses.”

Mr Terzi told the protesters: “Our protest today will show everyone we don’t agree with that.”

“We need to speak clearly as European citizens, so that our voice can be heard by the people governing us.”