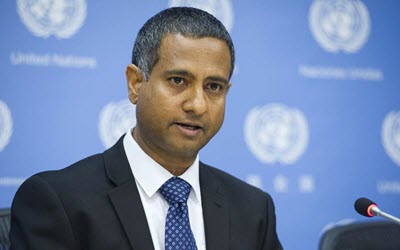 Ahmed Shaheed told a news briefing in Geneva that he is particularly concerned by executions for crimes committed by children under 18. This was “strictly and unequivocally prohibited under international law,” he said.

There had been a “staggering surge in the execution of at least 966 prisoners last year – the highest rate in over two decades”, Shaheed said.

“A large percentage of those executions are for drug offences and under Iran’s current drug laws, possession of 30 grams of heroine or cocaine would qualify for the death penalty. So there’s a number of draconian laws,” he said.

“The number of juvenile offenders executed between 2014 and 2015 – which is reportedly 16 – was higher than at any time during the past five years,” Shaheed said.

The U.N. Committee on the Rights of the Child said last month that Iran must reform laws that allow girls as young as nine to be executed for crimes or forced into sexual relations with older husbands.

“Fundamental problems also exist with regard to the due process and fair trial rights of the accused,” Shaheed said.

“I continue to receive frequent and alarming reports about the use of prolonged solitary and incommunicado confinement, torture and ill-treatment, lack of access to lawyers and the use of confessions solicited under torture as evidence in trials – practices that clearly violate Iran’s own laws,” he said.