Fearing protests on May 1, Iran regime threatens workers in Sanandaj 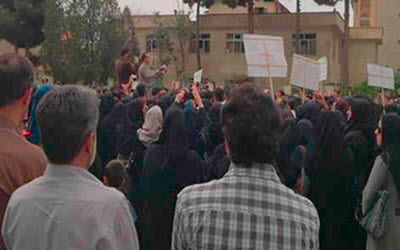 NCRI – The mullahs’ regime is taking draconian measures to prevent workers in Iran from holding protests on International Workers’ Day on May 1.

Each year the regime tries to create an atmosphere of intimidation and threats against workers in order to prevent them from holding anti-regime rallies. This year, they have made a last-ditch effort to do so.

In Sanandaj, western Iran, in the run-up to International Workers’ Day, the authorities have summoned workers and their representatives in order to frighten them off from holding acts of protest.

On Wednesday, April 20, suppressive state security force began to exert pressure on the advocates of workers’ rights in Sanandaj. A group of workers, including Khaled Hosseini, Ghaleb Hosseini and Majid Hamidi, were summoned to the police intelligence office by agents of the regime’s notorious Ministry of Intelligence and Security (MOIS). They were warned not to participate in gatherings on International Workers’ Day.

The regime began further suppressive security measures ten days before May 1 to prevent workers’ demonstrations. The regime is believed to be particularly worried by the possibility of angry rallies given the recent escalation in its unemployment crisis.

The People’s Mojahedin Organization of Iran (PMOI or MEK) has made a nationwide appeal for workers and people of all strata of Iranian society to hold anti-regime protests on International Workers’ Day.