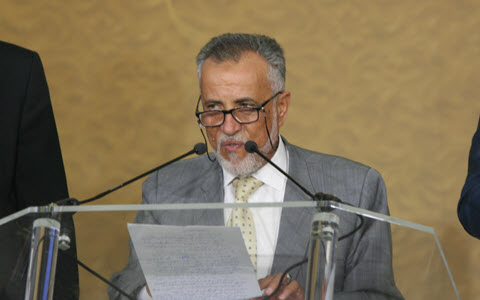 NCRI – Attended by president-elect of Resistance of Iran Mrs. Maryam Rajavi, a meeting was held on June 3, at which prominent political and religious figures from different Islamic countries and Muslim communities took part and delivered speech.

Also present at the meeting was a delegation from Jordan.

Mohammad Al-Haj, former Jordanian MP, said in his speech “we are all familiar with the role the Mullahs’ regime is playing, both independently and in collaboration with ISIS, to destroy the region. This dirty role has torn the region apart and spread destruction, murder, and displacement all over it.”

“So, we need to step up our efforts in order to stand against the Iranian regime’s sponsoring of evil all over the world”, said Al-Haj, adding “ what needs to be considered is that we all stand by true representatives of Iranian people, namely Iran National Council of Resistance and the PMOI. So, greetings to their prisoners held in Iran’s prisons, and, prior to that, greetings to their martyrs. Their movement has offered 120 thousand martyrs for freedom and human rights, demanding that Iranian people’s rights and dignity be realized.”

“Once representatives, we formed the Arabic-Islamic committee to protect Camp Ashraf residents. Right now, two former and current members of Jordanian Parliament are sitting next to me. On my right is former MP Qasi Al-Damisi, and on my left is Mr. Representative Muhammad Al-zahravi. The Parliament of Jordan has been standing by PMOI since 2009, particularly with regard to the issue of Camp Liberty. Each year we gathered signatures of more than half of Jordanian MPs, who all endorsed the Resistance and were suffering from the oppression residents of Camps Ashraf and Liberty were put through by Iranian regime’s hirelings in Iraq. Fortunately, the Resistance eventually succeeded to transfer its members to a safe place thanks to it’s continues efforts at an international level.”

“Following that”, he added, “the Arabic-Islamic committee for protecting Ashraf residents was turned to Arabic-Islamic Committee of Solidarity with Resistance of Iran, as we rely on Resistance of Iran as a hope, a third way, and an alternative. We don’t want war in the region even with the Iranian regime; we don’t want the United States to bomb Iran. No, we’re calling for supporting the alternative and the third way, namely Resistance of Iran, so it will be able to rule over Iran based on democracy, human rights, and respecting regional countries and cooperating with them away from terrorism, evil and fundamentalism, so that the situation in Syria, Iraq, and Yemen will no longe be subjected to Iranian regime’s interventions.”

“I’m asking God to help PMOI lead Iranian people with its wise leadership. We Hope to meet with Mrs. Maryam Rajavi in Tehran. Thank you”, said Al-Haj, concluding his speech.