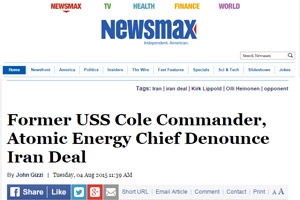 Opponents of the proposed Iran nuclear deal got some star-studded support this week as the longtime deputy director of the International Atomic Energy Agency (IAEA) weighed in against the controversial agreement, Newsmax reported on Tuesday.

The retired commander of the USS Cole, which was attacked by terrorists in Yemen in 2000, also came out on Monday against the deal, the report said.

Speaking to a packed room of reporters at the National Press Club, both retired U.S. Navy Commander Kirk Lippold and Dr. Olli Heinonen, formerly the No. 2 official at the agency that will oversee inspections of Tehran’s nuclear capabilities, underscored their criticisms of the deal that the U.S. Congress must vote on within 60 calendar days of the agreement.

Dr. Heinonen, who worked at the IAEA for 27 years, said he was bothered by the “24-day delay in the agreement” — the time allotted in the agreement before IAEA inspectors are permitted to begin their work in Iran.

He contrasted the agreement that Congress will soon address to others that open up countries to nuclear inspection by the IAEA “in 24 hours.”

“This is a little weak,” said Dr. Heinonen.

“This is a fundamentally flawed agreement,” agreed Cmdr. Lippold.

Cmdr. Lippold said that by “not elevating the agreement to the status of a treaty” and thus requiring ratification by two-thirds of the Senate, the president has “taken unprecedented action to neutralize another branch of government. That alone should disqualify it.”

The much-decorated retired naval officer also warned that the agreement with the regime in Iran did not cover “ballistic missile technology” and that this was “dropped by the administration without explanation. This only benefits Iran and no one else.”

Cmdr. Lippold went on to voice his belief that the estimated $150 billion in frozen Iranian assets, once unfrozen under the agreement, “will not be used to stabilize the [Iranian] economy. Iran will use its new-found [wealth] to intimidate neighbors” by backing fundamentalist groups such as Hezbollah. This, he warned, could lead to future incidents “similar to the time when the Cole was hit by a sneak attack [and 17 Americans were killed].”

Joining Cmdr. Lippold and Dr. Heinonen at the Press Club event was Alireza Jafarzadeh, deputy director of the Washington office of the Iranian opposition coalition National Council of Resistance of Iran, which first blew the lid off Iran’s clandestine nuclear program in August 2002.

“Iran came to the table because it was hurting and vulnerable,” said Mr. Jafarzadeh, citing “strikes across the country and demonstrations. And ’09, when millions demonstrated against the regime, is in the back of their minds.”

He went on to brand the theocratic regime as “rotten to the core, plagued by corruption and mismanagement.” Rather than make the agreement it did, Mr. Jafarzadeh said, the Obama administration “should apply more pressure and reach out to the Iranian people,” and in a few years, the U.S. might well be facing a “non-nuclear, secular republic in Tehran.”