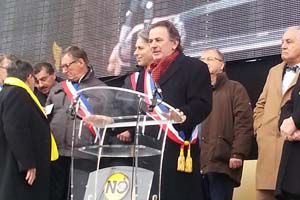 Jean-François Legaret, mayor of the 1st district of Paris, addressed a demonstration by thousands of Iranians and human rights activists against the presence of the Iranian regime’s president, Hassan Rouhani, in the French capital.

The protesters urged France and other EU governments to make their relations with the Iranian regime contingent upon an improvement of human rights in Iran and an end to the support of the mullahs for the massacre of the Syrian people by Bashar al-Assad’s regime.

They stressed that a free and democratic Iran is a fundamental need to ensure stability and peace in the region.

Jean-François Legaret was among many European politicians, members of parliament and human rights activists who spoke at the rally.

Below is the English translation of the remarks by Jean-François Legaret, mayor of the 1st district of Paris, at the January 28 rally:

Today, France is making a mistake, that’s why we are gathered here, to support the Iranian people and their resistance, led by Maryam Rajavi.