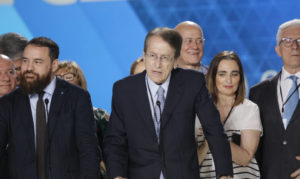 There is good reason to believe that Iran is closer than it has ever been to the overthrow of its theocratic dictatorship. This belief was shared by many prominent international personalities who participated in the Free Iran Global Summit. The event connected Iranian expatriates and their political supporters from 30,000 different locations in more than 100 countries.
The substance of this message is well known to the hundreds of Western lawmakers and experts, representing a wide range of political parties, who have already solidified their support for the NCRI. Roughly 1,000 political dignitaries connected to the livestream or to participate in the simultaneous gatherings which was held at historical sites in Washington D.C., Paris, Berlin, and so on. Speakers at the summit, included, Mayor Rudy Giuliani, Senator Joseph Lieberman, Mr. Newt Gingrich, former Speaker of the US House of Representatives, Mr. Stephen Harper, former Prime Minister of Canada, Mr. Sid Ghazali, former Prime Minister of Algeria, Mr. Pandeli Majko and Sali Berisha, former Prime Ministers of Albania, Mrs. Michèle Alliot-Marie, Mr. Giulio Terzi, Mr. John Baird, Mrs. Anna Fotyga, Former Foreign Ministers of France, Italy, Canada, and Poland, respectively, Mr. Riad Yassin and Mr. Khaled al-Yamani, former Foreign Ministers of Yemen, and Mr. Jawad Anani, former Foreign Minister of Jordan.
The common message of the speakers and participants in the summit was the real potential for regime change in Iran.
“The mullah’s regime is the number one terrorist state and that is why action is needed now to get rid of a system called Islamic republic,” Mr. Giulio Terzi, former Foreign Minister of Italy said in his message to Free Iran summit.
Mr. Terzi also elaborated on the critical situation of the regime and the leading role of Mrs. Maryam Rajavi and said: “The regime is very frightened, and the movement is lead by Madam Rajavi, and inspired by her 10 point program for democracy for Iran,”
Mr. Terzi also called for the closure of Iranian embassies and said: “The Iranian regime’s embassies that act as launching pads for terrorism must be immediately closed,”
Ambassador Terzi also called for the mullahs to be held accountable for the 1988 Massacre in Iran.

“The Iranian regime’s embassies that act as launching pads for terrorism must be immediately closed”, former Italian Foreign Minister @GiulioTerzi tells the #FreeIran2020 Global Summit. Ambassador Terzi also calls for the mullahs to be held accountable for Iran’s #1988Massacre. pic.twitter.com/dzinlB56RP