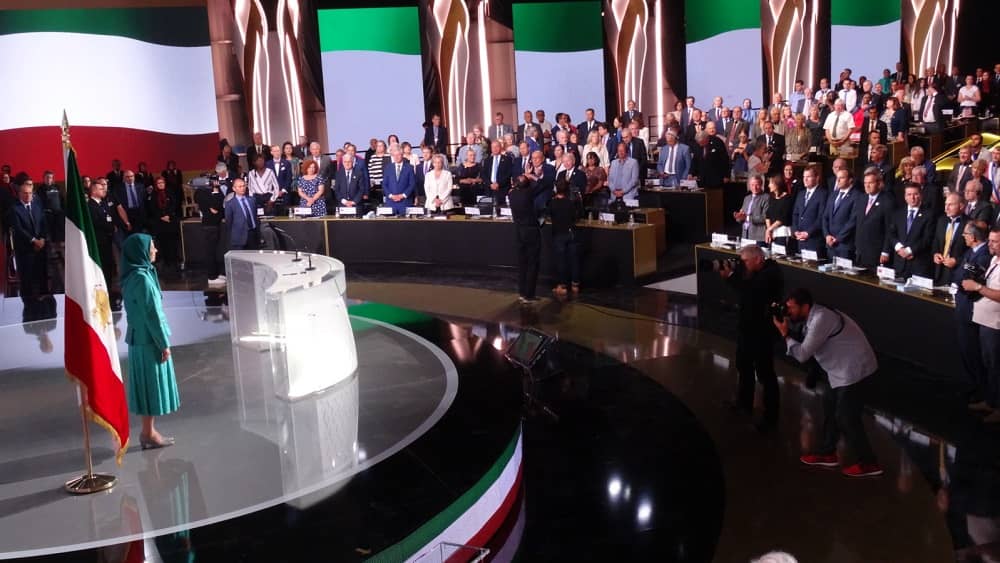 In March, the British Committee for Iran Freedom released a statement calling for a more assertive, multilateral Western strategy toward the Iranian regime, defined by “tougher sanctions” and clear demands for accountability regarding the regime’s human rights abuses and terrorist acts. The statement was immediately signed by dozens of members of the House of Lords and the House of Commons, as well as various lawmakers elsewhere in Europe. It has since continued to circulate while accumulating more signatures – over 400 at last count.

In June, various members of the European Parliament issued their own statement in a letter to the European Commission President Ursula von der Leyen and the President of the European Council, Charles Michel. It echoed that the existing Western policies have contributed to a culture of impunity within the Iranian regime, and it emphasized that the task of confronting that impunity has only been made more imperative in light of the June 18 sham presidential election that established the former judiciary chief, Ebrahim Raisi, as the successor to the regime’s outgoing President Hassan Rouhani.

As the June statement noted, Amnesty International reacted to that development by calling it a “grim reminder that impunity reigns supreme in Iran” and suggesting that instead of being appointed to the presidency, Raisi should have been “investigated for the crimes against humanity of murder, enforced disappearance and torture.”

This call derives primarily from two incidents: the 1988 massacre of Iranian political prisoners and the crackdown on a nationwide protest movement in November 2019. The first was carried out by “death commissions” of which Raisi was a prominent member, and the second took place several months after Raisi was appointed as judiciary chief by the regime’s Supreme Leader Ali Khamenei.

In March, the BCIF statement did mention the 1988 massacre in the context of the very first item on its list of concerns and recommendations. After expressing “deep concerns about ongoing human rights violations in Iran,” the statement condemned the “failure of the UN and the international community to address the alarming human rights situation, including the massacre of 30,000 political prisoners in 1988.”

The BCIF underlined that a trend of inaction had “emboldened the regime” to undertake more human rights abuses while continuing to promote those officials who had played a leading role in past crimes against humanity. Raisi’s pending ascension to the presidency is a prime example of both of these phenomena, in that his appointment as judiciary chief appears to have been a reward for the service he rendered to the regime as part of the death commissions, while his “election” to the presidency appears to be a similar reward for the ongoing commitment to human rights abuses that he demonstrated as judiciary chief.

The MEPs’ June statement underscored the fact that Raisi’s promotion was an election in name only. It noted that even Iranian regime authorities acknowledged that over half of eligible voters declined to participate in the election. It also cited opposition activists and independent journalists as support for the conclusion that the actual rate of participation was less than one in ten.

This electoral boycott was a rejection of the entire regime and its factions, which urged the people to participate in the election as a way of showing support for the ruling system and the Islamic revolution.

Indeed, the People’s Mojahedin Organization of Iran (PMOI/MEK), the leading voice for a democratic alternative to the clerical regime, specifically promoted the electoral boycott as a “vote for regime change.” Widespread support for that goal was previously revealed in the November 2019 uprising, which encompassed nearly 200 localities and featured provocative, anti-government slogans which had already achieved tremendous popularity during another uprising in January 2018.

For a time, the coronavirus pandemic succeeded where the regime’s repression failed. But in advance of last month’s electoral boycott, NCRI Foreign Affairs Committee Chairman Mohammad Mohaddessin specifically stated in a May press conference spoke of another possible uprising, and that this uprising would be “far more intense and widespread than in recent years.”

Mr.  Mohaddessin urged Western governments to condemn the anti-democratic process behind Raisi’s promotion, to “end impunity for the mass murderers” of whom Raisi is one, and to “stand on the right side of history and with the Iranian people in their quest for freedom.”

Thousands of renowned politicians would be joining the Free Iran World Summit from this Saturday until Monday to support regime change in Iran. The event will bring together Iranian expatriate communities from throughout the world, in the interest of highlighting the breadth of support that exists for regime change in their homeland. It will also provide Western supporters of that cause with an opportunity to present their policy recommendations in context with the most up-to-date information about developments inside Iran.

Anyone who has not heard those recommendations should pay close attention to the summit, as should anyone who has heard them but still remains on the fence about their value, urgency, or practicality. Over the years, many policymakers and entire governments have rejected appeals for more assertive Iran policies on the basis of their false assumption that regime change was unattainable or that the consequences of such change would be entirely unpredictable. The uprisings of 2018 and 2019 and last month’s electoral boycott all serve to demonstrate that historic change is within reach, while Maryam Rajavi’s 10-point plan makes it clear that there is a plan for the country’s democratic future in the wake of that change.

That plan was specifically highlighted by the BCIF in its March statement as something that deserves the support of Western governments. That message will no doubt be reiterated by many of the statement’s signers, and by many others, at this weekend’s summit, and the international response should be much more widespread and enthusiastic this time.