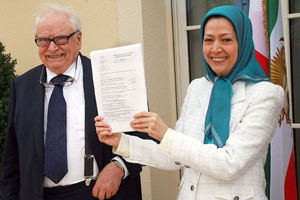 Source: French Daily Le Parisian
This is a victory for members of the Iranian Resistance based in Auvers-sur-Oise (France) since 1981. On Wednesday, the anti-terrorist judge Marc Trévidic signed a general order of dismissal, required by the Paris Prosecutor’s Office in the investigation of these opponents of the Mullahs.

” Now, the French judicial system acknowledges that the resistance of the PMOI (MEK), whether in the form of the National Liberation Army (NLA) or in the PMOI operations inside Iran, has been legitimate and is not considered terrorism,” responded Mrs Maryam Rajavi, President of the movement.

It has been eleven years that the activists have been expecting this moment as the wounds of June 17, 2003 were still open.

That day, 1,200 police mandated by the anti-terrorist judge Jean-Louis Bruguiere, in front of the cameras raided the premises of their organization in the Val-d’Oise region and seven surrounding towns. One hundred and sixty-four people are arrested, a large sum of money and computer equipment were confiscated.

While they were in police custody, several people set themselves on fire in protest. Twenty-four activists including Maryam Rajavi were indicted for “criminal association in relation with a terrorist enterprise”. Then, almost nothing.

In 2006, judicial controls were considerably reduced.

The case is over, Resistance’s lawyer Henri Leclerc welcomed the decision and said: “In 2003, there wae talk of major terrorists, it is clear that it is not. Today, the People’s Mojahedin Organization of Iran (PMOI/MEK) are cleared of any suspicion.”

Previous articleIraqi forces block fuel entering Camp Liberty, hamper residents’ access to medical services
Next articleRep. Engel: ‘If Hassan Rouhani is a moderate he should act like it once in a while’