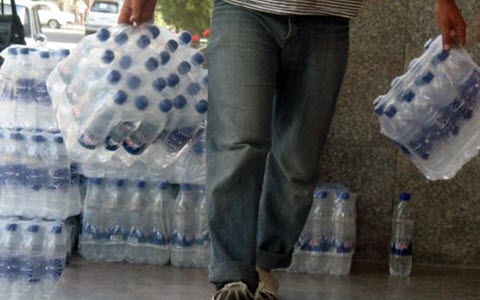 NCRI – The state-run ISNA news agency quoting the secretary of the association of mineral water and beverage producers wrote on June 27 that following issuance of permit for imports of water packaging, the legal import of these products to Iran has begun.

Earlier, Iranian media had reported about smuggling of carbonated drinking water to Iran.

The news agency reported last month that “part of carbonated drinking water present in Iran’s market is imported from Norway and part of it is smuggled from Armenia inside suitcases.”

According to the report “luxury packaging water” is offered at 60,000 Tomans (~$25) in supermarkets and restaurants in northern Tehran.

The import and smuggling of mineral drinking water is confirmed while each year 1.1 billion liter of packaging water is produced inside Iran.

Meanwhile, some state-run media reported that among 21 different kinds of best-selling mineral water in Iran’s market only 9 are healthy.

The director of the Food and Drug Administration said that more than 10 percent of the mineral water in the Iranian market “has chemical, microbial, heavy metals, nitrate, and nitrite pollutants.”

Previous articleIran Regime’s Parliament Plan to Deal With the Sanctions of U.S. Senate – Appropriation of 1000 Billion Tomans to Iran’s Missile Program
Next articleWhat’s the Real Number of Iran’s Drug Addicts?