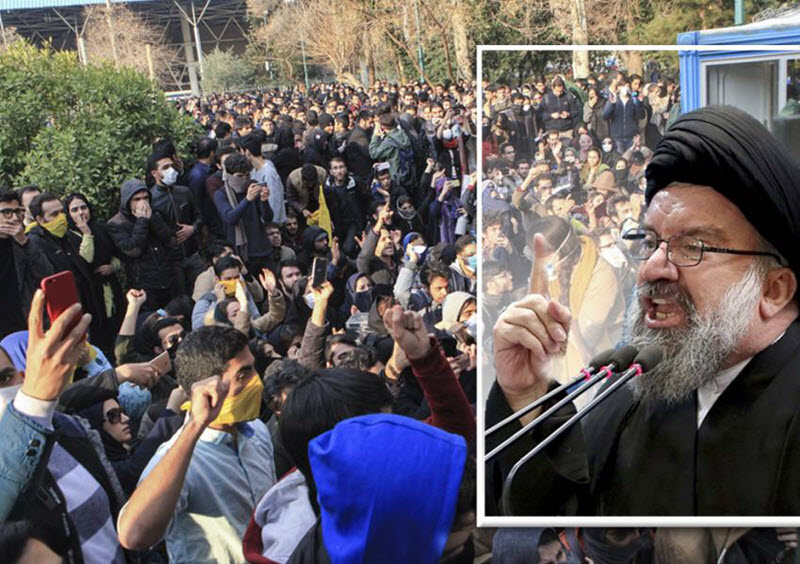 Friday prayer leaders in Iran often reflect the views of supreme leader Ali Khamenei during their public addresses, so it’s very telling that they’ve recently been focused on warning the public about the role of the organised and democratic Iranian Resistance in undermining the mullahs’ rule.

This shows that the popular anti-regime uprising that swept the nation in 2018 and continues despite the mullahs attempts to suppress it has terrified the Regime leaders.

The Friday prayer leaders said that the “plans of the enemy” and “uprisings by the disenchanted population” pose a direct threat to “the Revolution”, by which the mullahs mean their hostile takeover in 1979.

In Golpaygan, Friday prayer leader Mohammad Taghi Keramati described an enemy who wanted to “destroy the roots of the establishment” and cautioned officials not to be scared or weaken their resolve.

In Arak, Ghorbanali Dori Najafabadi specifically named the Iranian Resistance as the enemy and called on the Regime to “resist”.

Other Friday prayer leaders, like Gholamali Naeem Abadi of Hormozgan, gave thanks that the mullahs’ regime has not been overthrown yet as a way of hiding their fear that it will soon happen.

Abadi said: “As we approach the 40th anniversary of the Revolution, all the enemies who prayed for the destruction of the establishment have themselves been destroyed.”

But Yusef Ghassemi, the Friday prayer leader of Kangan, acknowledged that the Iranian Resistance is working to undermine the Regime’s 40th-anniversary celebrations with protests. Importantly, if the Iranian people supported the Regime, these protests would not happen.

But Friday prayer leaders are just one sector of the Iranian Regime complaining about the problems they are facing. Iran’s foreign ministry recently tried to criticise the EU for allowing the Iranian Resistance to hold gatherings on its soil, right after the EU issued sanctions against Iran for terrorist plots in Europe.

The Regime tries to dismiss and diminish the role of the Iranian Resistance, but their fear only shows how powerful the Resistance is.