General McMaster: Most Dangerous Course of Action Is to Ignore Iran Regime’s Threat 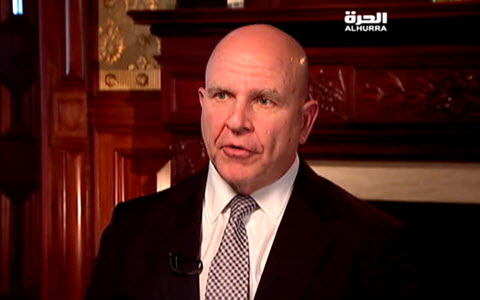 NCRI – National Security Advisor of the United States Lieutenant General H.R. McMaster was interviewed by Alhurra (a US-based satellite TV channel in Arabic language dealing with current affairs). He spoke extensively about the Iran, Iraq, Syria and the Kurdish issue.

He emphasised that the Iranian-backed militias are there to serve Iran’s interests only, and this is evident through incidents like the Kurdish referendum where they took advantage of the divisions in the Regional Government and in the Patriotic Union of Kurdistan since the death of Jalal Talabani. Iran has advanced its own interests “at the expense of long-term security and stability in Iraq”.

McMaster said that the drivers of the sectarian violence need to be removed and reiterated that the US is “very committed to a unified, strong Iraq”.

He warned that the violence, if it continues, would jeopardise the progress that has been made in recent months with regards to the Islamic State.

When asked whether it is possible to contain Iranian influence, McMaster said it most certainly is. He said that a relationship between Iraq and Iran is important because of their geographical proximity, but it must be fair. In other words, Iraq needs to be strong and at the minute it is not because Iran is willing the government (there and elsewhere) to be weak and dependent on Iran.

Speaking about possible ways to confront the threats, McMaster said: “I think what the most dangerous course of action to take is to not confront Hezbollah, to not confront these Iranian proxies who are propping up and the Assad regime, and helping that regime continue to murder its own people. To not confront Iran’s support for Houthis in Yemen in a way that was perpetuating that civil war there. In a way that is not only creating even more suffering inside Yemen, but is also posing a threat in the region to Saudi Arabia in particular. And so, wherever you see problems, wherever you see communities pitted against each other and a destructive cycle of violence, you see the hand of the Islamic Revolutionary Guards Corps of Iranian regime. And in Lebanon, this beautiful thriving now country, its security has been placed at risk by the continued Iran reime’s support for Hezbollah and the provision of Hezbollah with weapons and other capabilities that threaten regional security.”

Like President Trump, McMaster spoke about the plight of the Iranian people and emphasised that they have not been forgotten. He said that he hoped sanctions against the Islamic Revolutionary Guards Corps (IRGC) would confront its belligerence, but also incentivise people in Iranian society “to do legitimate business and not to do business to enrich an organization whose main export is murder and brutality”.