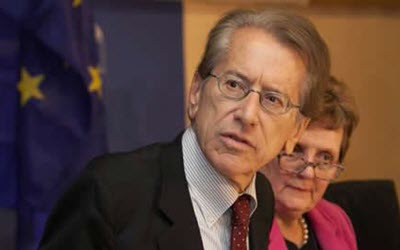 NCRI – The former Italy’s Minister of Foreign Affairs, Giulio Terzi warned about the interference of the Iranian regime in the region, stating that the regime intends to cover its disabilities in resolving people’s issues by exporting domestic crisis to abroad. Consequently, the regime is in dire need to export fundamentalism and terrorism and it cannot survive without interference.

In an interview with the Saudi Newspaper, al-Jazeera, Giulio Terzi stated: “in order to guarantee a democratic change in Syria without Assad, it is strictly necessary to prevent the Iranian regime’s meddling in Syria. Additionally, the regime’s meddling in Iraq must be stopped.
Nevertheless, for the successful realization of these goals in order to change the situation in Iran. All measures shall be implemented with the efforts of the Iranian Resistance and the MEK.
The 10-point plan formulated by Maryam Rajavi the president elect of the National Council of Resistance of Iran (NCRI) very well illustrates patience and contemplation. This [plan] can defeat fundamentalism in the Middle East, sovereign the moderating forces and democrats, and establish stability and democracy. Therefore, not only should [the Iranian Resistance] be supported by Western governments but it also has to receive support from all democratic nations as well as all citizens who think of human values and freedoms.

Previous articleIran Regime’s Ridiculous Claim: IRGC Defends the Region Against Terrorism
Next articleIran:  the Terrorist Mullah’s Trip to Europe Must Be Canceled