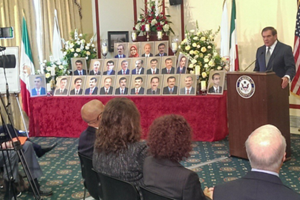 NCRI – Tom Ridge, a former U.S. Secretary of Homeland Security and Governor of Pennsylvania, has urged the Obama administration to bring Camp Liberty, which houses thousands of Iranian dissidents near Baghdad, within the aerial perimeter of U.S. air protection to prevent a repeat of last month’s deadly rocket attack on the camp by agents of Iran’s regime.

Speaking at a November 5 Congressional briefing on the rocket attack, Gov. Ridge said: “I join you today to acknowledge, to commemorate, and to mourn the sacrifice of these men and women at Camp Liberty. … And like any other kind of memorial, when you put faces on the martyrs it becomes much more personal. And for me it’s even more personal because of my strong belief in America, our values and our principles. And today I grieve personally the failure of my country to live up to those values and principles based upon the word it gave to these men and women many, many years ago when we asked them to surrender their own means of self-defense and trust us to provide for their safety and security. I’m not going to recite the multiple occasions when that trust has been violated by the continuing assaults and murders of residents of both Camp Ashraf and Camp Liberty. But I would be remiss if I didn’t talk about the responsibility of the United States to keep its word. It’s all these men and women in Camp Liberty want us to do. And so I grieve the fact that at least to this date we have failed to keep our promises.”

Gov. Ridge said a bipartisan group of U.S. lawmakers and former officials have written to U.S. Secretary of State John Kerry demanding protection for the residents of Camp Liberty.

He referred in particular to a letter by Senator John McCain to Kerry which said in part: “Given Camp Liberty’s proximity to Baghdad International Airport, has the administration considered the requirements to bring Camp Liberty within the aerial perimeter of U.S. air protection to ensure that the firing of missiles or mortars would not be permitted on the camp.”

Gov. Ridge said: “I think that’s easily done. You can do it with a stroke of the pen. A simple direction from the president to the Secretary of State to the United States military command. And it’s about time we started living up to—this will not be enough, but it’s about time we started living up to our promises, and this would be a very important and effective first step.”

“I hope that some of these proceedings are made available to the extraordinary individuals, the heroes at Camp Liberty,” he said. Gov. Ridge referred to a musical video produced by the PMOI (MEK) members in Camp Liberty only three days after the terrorist rocket attack on their camp: “You saw that video and you saw in the ashes, still smoldering from the attacks less than a few days earlier, they rise up. And in the face of adversity, in the face of a malignant, venomous Iran that is super-connected to a corrupt Iraq, say to those who would bring them harm and sadly death, we will not be denied. You will not break our spirit. We are committed patriots. Martyrs we are, but we are prepared to be martyred for a cause greater than ourselves. Rather remarkable in the 21st century, in a world of iPad and iPhone and i-this and i-that, that’s the 21st century. This is not about I, in Camp Liberty; it’s about us. Rather interesting.”

“It reminded me of the look at American history for a comparison of Patrick Henry in Virginia in 1775 who in an impassioned speech, because he was going to really the Virginia militia and get a cavalry, he listed the transgressions of the British magistrate, the British government. And at the end of this impassioned speech he simply said, ‘Give me liberty or give me death.’ This is the Iranian version, because they’re prepared to die in order to secure liberty. And while we mourn their death and their sacrifice, we celebrate their vision and their hope and their commitment for a better life for their children and grandchildren in the country that they love and revere, a country with a proud historic past, a country filled with brilliant young people, a country just aching to remove the repression of the mullahs.”

“So if this gets to our brothers and sisters in Camp Liberty, we mourn the loss of your friends and loved ones, we commemorate, and if you don’t mind we use the word celebrate, although it’s difficult to do it, a memorial service but we celebrate your commitment, your passion, the sense that you’ve embraced the notion that there’s a cause greater than you as individuals and the cause is for a free democratic Iran. And you’ve heard me saying this before, it bears repeating as I conclude, I had the great pleasure of spending a little time with Indira Gandhi before she was assassinated. And I’d read some of her works before that meeting. And at one point in time in her life she had given a speech and she said, ‘You can exile a man but not an idea. You can imprison a man but not an idea. You can kill a man but not an idea.’ So the Iranian government take heed, the Iraqi government take heed. The inspirational martyrs and living residents of Camp Liberty, you can imprison them, you can intimidate them, you’d love to kill them all. But you’ll never destroy the idea from a self-governing, free, democratic Iran. That’s their call to all of us to ensure that we embrace that notion ourselves.”

“And those of us in a position of responsibility and influence” must “continue to press forward to ask our government, this administration today, not tomorrow, to take the first step in protecting the survivors of Camp Liberty and Ashraf. And that first step would be to expand the air perimeter around the airport to make sure that this camp is not subject to further attack by artillery or mortars.”