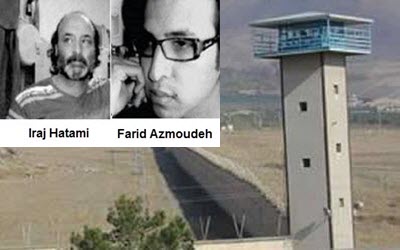 NCRI – A group of ordinary prisoners in being held in Ward 6 of Gohardasht (Rajai-Shahr) Prison in Karaj, north-west of Tehran, have sent out a letter praising the Iranian Resistance’s July 9 “Free Iran” rally held in Paris.

The prisoners said in their letter that they had managed to secretly watch the “Free Iran” rally on their mobile phones inside the prison.

The following is the text of the letter of the prisoners of Ward 6 of Gohardasht Prison, about the “Free Iran” rally:

“What a great performance! Saturday was a memorable day for us, the prisoners of Gohardasht prison. You actually honored us by your great work. Your great work must be acclaimed. We praise those compatriots who attended in the large gathering although they were busy in their own life and work. May you live long, those who came to support the toppling of the mullahs’ regime.

The gathering was full of people and was so crowded. Never had we seen such an inclusive participation of foreign representatives before. You cherished us with your gathering. We swear by the Quran, if they execute us we won’t be upset at all, because we are now blowing some steam off. You have no idea what is going on in our ward.

On the day of the rally we assigned some people to guard the hall of ward 6, and interestingly we were watching your continuous show on our cell phones while laughing and saying: ‘Now it will really finish.’ We were even trying to charge our cell phones continuously in order to watch the show. I must say that all of you did a good job.

As we called one of the prisoners’ cousins, we realized that they are also watching your live show broadcasted from Paris. We also told them that we are watching the show in prison and they got surprised and asked us if we had satellite set, and in response we said that we are watching the gathering on our cell phones. The cousin was crying and saying: ‘No one is able to liberate Iran from the Mullahs’ regime, except Masoud and Maryam Rajavi. Do you see how Maryam Rajavi is talking courageously and strongly? Her speech is as a death to Khamenei.’

At the end, he said: “I ask you to say my regards to the prisoners of ward 6 and say my greetings to Maryam Rajavi. Please tell them that we are praying for you, day and night. We hope to see Maryam Rajavi in Tehran one day when the mullahs’ regime rules no more. I would like to tell you something truly. Your gathering affected and raised the fury of thousands of mullahs in Iran.”

Hail to the dignity of the PMOI.

The prisoners of Ward 6 of Gohardasht Prison”