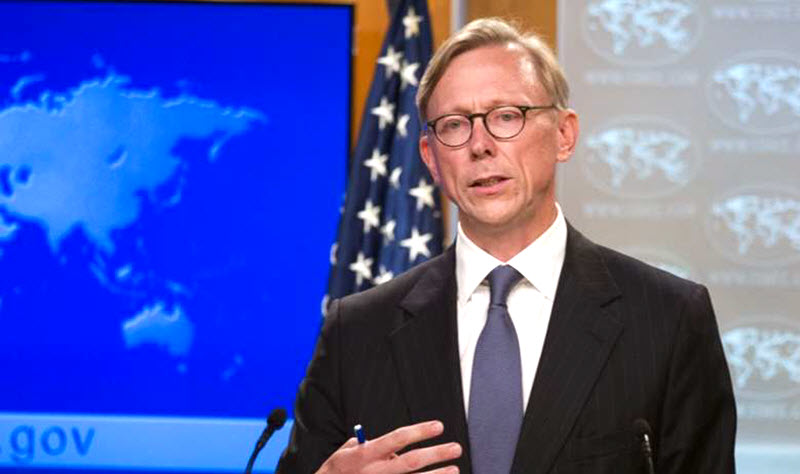 US special envoy for Iran, Brian Hook, told reporters on Monday that the US still intends to cut Iran’s oil sales to zero by November 4 without having a negative impact on the oil market.

He said: “We are working with countries that are reducing their imports to ensure that this happens.”

He explained that the Iranian Regime uses its oil revenue to support and fund terrorist proxies throughout the Middle East, which is why the US is so determined to see a decline in the oil exports.

Hook had just returned from a visit to India – one of Iran’s largest oil customers – and meetings with officials from France, Britain and Germany – three countries trying to save the nuclear deal and prevent US sanctions against Iran.

He did not answer questions on sanctions waivers, but did say that the US believes that energy markets will remain stable.

He said: “We are seeing a well-supplied and balanced oil market right now. We should focus on these fundamentals and not be distracted by the emotional and unbalanced claims coming from Tehran.”

While Iran is the third-largest producer in OPEC, many other oil-producing countries, including the US, can increase their supplies to meet the demand.

Hook said: “Our crude oil production increased by 1.65 million barrels in August compared to one year ago and that is expected to continue rising by as much as 1 million barrels a day within the next year.”

He also dismissed the idea of a European special purpose vehicle for trade with Iran, citing that many foreign companies had already left the country and there would be no demand for the plan.

Iranian oil exports have already taken a significant hit from US sanctions, which are yet to be enforced, with many countries stopping their shipments. According to tanker data, China, India, Turkey, Italy, and the Middle East are the last buyers of Iranian crude.

According to Refinitiv Eikon, Iran has exported 1.33 million barrels per day (bpd) so far in October to India, China, Turkey and the Middle East, and according to an industry source, a certain amount is going to Italy as well.

Still, the exports are down from at least 2.5 million bpd in April, before Donald Trump pulled out of the nuclear deal and vowed to reimpose sanctions.

The latest figures indicate that buyers are wary of US sanctions and are scaling back their Iranian crude dealings.