Hook: You Can Work With US or Iran Regime; Not Both 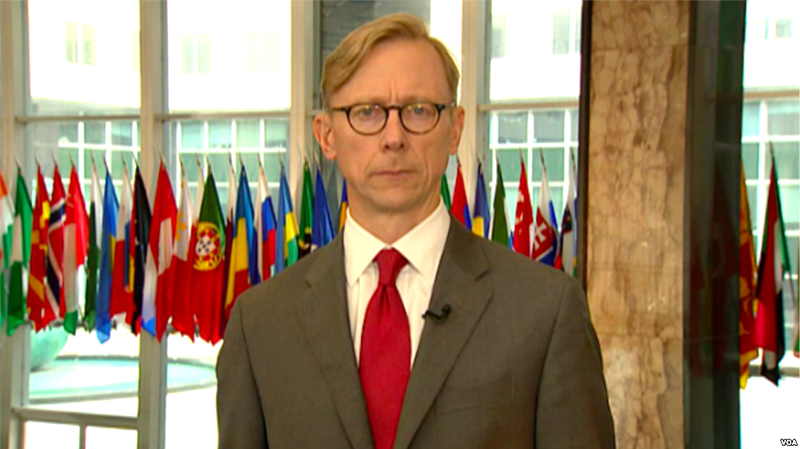 US Special Representative for Iran Brian Hook said that the US has already denied the Iranian regime more than $10 billion in revenue, with that number expected to increase dramatically following the ending of sanctions waivers to Iran’s eight biggest oil customers at the beginning of next month.

He said: “We have denied this regime over $10 billion in revenue. That number is going to go up dramatically now that we’re giving no more oil waivers… when you look at polls, and interviews with the Iranian people and you ask them who do you blame for your economic troubles, two-thirds of them blame it on President Rouhani and the Supreme Leader. You only have a third who attribute it to the United States. And that is significant because the Iranian regime lies to its people all the time about their economic troubles, and in spite of the lies, they still know where to blame. They know whom to blame. And so the Iranian people know that we stand with them.”

Hook also explained that a lot of the US’ national security goals regarding Iran are shared by Saudi Arabia and the United Arab Emirates, which is why the countries are working to increase their oil production and stabilise the global market ready for when the sanctions waivers on Iran expire.

He said: “We had very good meetings with both of the Saudis and the Emiratis, and they share a lot of our national security goals with respect to Iran. So it’s in our interest and it’s in their interest to deny the Iranian regime the revenue it needs to fund its foreign policy. And now Saudi Arabia has been very helpful, increasing its production as it did many months ago in order to offset the loss of Iranian crude, and they’ll continue to be helpful.”

Hook also noted that the sanctions on Iran were designed to cut off Iran’s funding of Lebanese terror cell Hezbollah, as 70% ($700 million) of Hezbollah’s annual revenue comes from the Iranian regime.

He said: “In March the leader of Hezbollah made a public appeal for donations and it was the first time in history they’ve had to do that. There was a New York Times front-page story about how Iran’s proxies in the region are experiencing a loss of revenue [because] ‘Iran simply doesn’t have the money to fund us like they’ve used to’. That is a consequence partly of Iran mismanaging their economy because they have less money, they’re in a recession now. But it’s also because our sanctions are denying the regime a lot of revenue.”

On Monday, the US said that it would allow sanctions waivers on the purchase of Iran oil to expire on May 2. These waivers were issued to Iran’s eight biggest customers – India, China, South Korea, Japan, Taiwan, Greece, Italy, and Turkey – in November when the US reimposed sanctions on Iranian oil following the withdrawal from the 2015 nuclear deal in May 2018.

This has sparked some blowback from China, but Hook noted that China already reduced its imports of Iranian regime’s crude oil considerably and that it was in China’s best interest to comply with the US.

He said: “Because if a country decides to act outside of it and to choose the Iranian market over the United States market, and that really is the choice we’re presenting countries, you can either work with the United States, or you can work with Iran, but you can’t do both.”