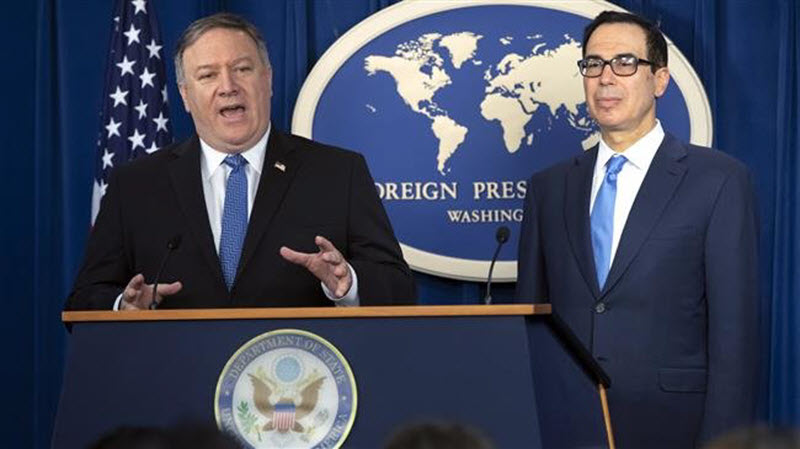 The US has now imposed on Iran the toughest sanctions ever, according to Treasury Secretary Steven Mnuchin and Secretary of State Mike Pompeo, with the main targets being individuals, aircraft, vessels, and organizations linked to the energy sector.

On Friday, they told reporters: “The US will add 700 individuals and companies to a list of blocked entities, 400 of which were not originally sanctioned before the Iran nuclear deal.”

Despite all of this, Iranian leaders are continuing their malign behaviour, which mainly involves robbing the Iranian people and using that ill-gotten money to fuel human rights abuses, regional meddling, and terrorist groups.

Just last week, Danish authorities accused Iran of plotting to assassinate an Arab leader living in Denmark, who is opposed to the Regime, all while reports from inside Iran showed that the country’s economy is failing even before the reimposition of US sanctions.

The state-run media in Iran is reporting that many companies are going bankrupt and either laying off workers en-masse or refusing to pay their workers. Reportedly, over 500 factories face crises. And these economic problems have been one of the major causes of the huge protests taking place in Iran.

On Friday, the fourth round of the heavy truck drivers’ nationwide strike entered its third day, with the strikers seeking the meeting of their demands from previous strikes as well as the release of their arrested colleagues. Their strike continues despite threats and suppression from the Regime. In fact, reports indicate that a number of drivers have been summoned to their local judiciary offices for questioning over the strikes.

Hassan Mahmoudi, a human rights advocate specializing in political and economic issues relating to Iran and the Middle East, wrote: “Whether this escalates further, worsening the conditions imposed due to US sanctions, will become clear in the days to follow.”

Meanwhile, as a result of the truckers’ strike, a significant portion of the steel production line in Mobarakeh of Isfahan Province in central Iran has closed down.

Another group on strike in Iran are the farmers in Isfahan. They are protesting the Regime’s severe water mismanagement at a time when, according to the UN’s Food and Agriculture Organization, Iran is facing the most prolonged and severe drought in over 30 years.