Human rights in Iran must not be overlooked: French MEP José Bové 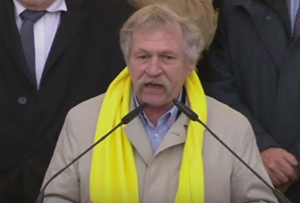 José Bové, a prominent French Member of the European Parliament, told thousands of supporters of the Iranian opposition at the ‘No To Rouhani’ rally in Paris on Thursday that the appalling human rights situation in Iran must not be overlooked.

He told the protesters waving Iranian flags: “It’s a great joy to see all those Iranian flags that represent freedom of a population that had to fight 30 years ago against the dictatorship of the Shah of Iran.”

“But sadly, Khomeini came to power and he said ‘I will expand the caliphate’. Thirty years later, Daesh [ISIS or ISIL] says the same. The reasoning of the theocracies is unbearable. Today, we can’t accept that a population be subjected to the rule of the mullahs, and that men and women of that country, live under the yoke of religious dictatorship.”

“That is why at the European Parliament, many of us support the Iranian Resistance. And we support in this fight Mrs. [Maryam] Rajavi, the leader of a democratic and secular movement.”

“Today’s meeting between Rouhani and the French president is intolerable for a simple reason: humans rights must come before the laws of market forces and profit.” He added: “Men and women are dying in Iran or are being imprisoned because they want to live in a free and secular country.”

Previous articleFrance must support freedom in Iran: Jean-François Legaret
Next articleEditorial in French daily: Listen to the Iranian people