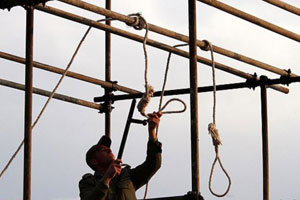 NCRI - Seven more prisoners have been hanged in public in Iran as executions continue to soar under Hassan Rouhani's rule.

More than 1,000 men, women and youths have now been put to death her the so-called 'moderate' leader who came to power 18 months ago.

On Wednesday, two men named as Ali M and Ali Q were hanged in public for 'mischief' in north-eastern city of Mashhad.

A group of five inmates were hanged in Gohardasht prison in city of Karaj. They were part of a group of nine that had been transferred to isolation on Tuesday. Four others they were returned to their cells after their execution had been delayed.

The two men were also hanged in the Ghasem Abbad district of the city of Mashhad at 9.30am local time today.

A video distributed on the internet this week shows the grief-stricken family members of eight executed prisoners mourning their loved-ones, whose bodies in black bags are lined up before them in a mortuary.

The video was secretly recorded on a mobile phone by an eyewitness who said a group of people are hanged secretly every Thursday in the city of Kerman.

The eyewitness said: "Many of the executions in this city are for possession of drugs offences. Usually these are young people who have grown up as orphans and due to poverty are now the sole breadwinner for their families."

Soaring human rights abuses in Iran, including an unprecedented rise in executions, the wave of state-organized acid attacks against women, and the continuing repression of religious and ethnic minorities, bloggers, reporters and activists are all taking place amid growing public discontent with the regime, but also in the absence of international action regarding the ongoing violation of human rights.