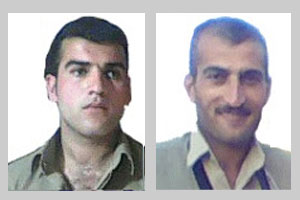 NCRI – The Iranian regime's henchmen in the central prison in the city of Orumiyeh have hanged two political prisoners.

Mrs Maryam Rajavi, President-elect of the Iranian Resistance, has called for urgent action to save the life of political prisoners in Iran.

She urged the United Nations, the UN Human Rights Council, the UN High Commissioner for Human Rights, and all human rights organizations to take urgent measures to save the lives of the political prisoners facing death in Uromiyeh prison.

She also called on UN Secretary General and Security Council, the United States and the European countries to take urgent and effective measures to save political prisoners in Iran, particularly these six prisoners, who are facing imminent execution.

Mrs Rajavi demanded that the dossier of the clerical regime's crimes including the execution of 120,000 political prisoners be referred to the International Criminal Court by the United Nations Security Council.