Iran: Juvenile Prisoner Revealed How He Was Tortured 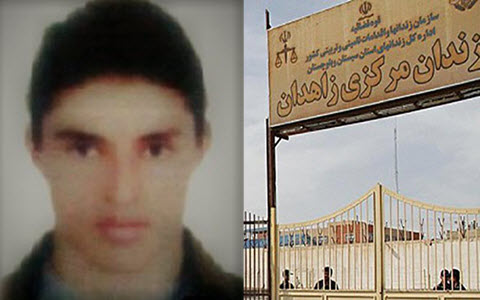 NCRI - An Iranian-born Afghan prisoner, arrested at age 16, wrote a letter to expose the brutal tortures that were imposed on him in the prison.

Amir Nourzehi was arrested in 2014 on the charges of robbery and sentenced to 10 years in prison according to the confessions taken under beating and mayhem. His cousin, who is a juvenile offender, has been sentenced to death in the same case.

He said that he was tortured at Zahedan (southeastern Iran); the agents arrested his friend's wife and threatened to assault her, and eventually made them confessed unrealistically.

Nourzehi said he was a shoemaker and waxed pedestrians’ footwear in the streets of Zahedan. He and his cousin lived in a rented home before being arrested by security guards in the same place.

He added: “One day, we were sitting at the same rented house with one of our friends, Aref Baluch, 22 years of age, when all of a sudden the security agents raided our home, handcuffed us and took us to the police station headed by Colonel Molla Shahi. They then made us naked and tied our hands from behind and hanged us up the ceiling with chains. They then started to whip us with cable and told us to accept the responsibility for the bank robbery.”

“WE didn’t accept anything until they brought Aref Baluch’s wife with her three months old child and removed her veil and started insulting us with abusive and vulgar words and threatened us that if you do not accept we do other things and threatened to assault her. Because we were very young, we had no choice but to accept whatever they said,” Noyrzehei continued.

He said despite that, we denied the charges in front of the prosecutor and insisted on our innocence, but unfortunately they wrote down contrary to what we have said and registered it.

“In the file, they wrote our age older than the real age, and because of this they did not transfer us to the children’s ward but instead they handed us over to the juvenile ward (Ward 2).”

“After one month, we were again taken to the intelligence office and were tortured again and new charges brought against us including possession of a kilo of narcotics and they said these drugs were found in your home and also showed us a gun and said you must accept the responsibility for the drugs and the gun. We were under so much pressure and tortured and we could not tolerate it anymore because we were so young and also because we did not know the consequences, we had to (were forced) to accept it.”

Aref Baluch’s wife was released from prison after 8 months and Aref Baluch himself was released after two years and nine months imprisonment. I and my cousin, because we were Afghans and we had no one, we were sentenced to 12 years in prison for bank robbery and 10 years in prison and execution respectively for possessing drugs.

We were also sentenced to pay the money back (apparently stolen from the bank) and we were tried in court once, we did not have access to a lawyer, and we have not been notified of a lawsuit.

The money that must be returned amounts to 14 million Toman and is related to the financial institution whose officials are now fugitive due to fraud.