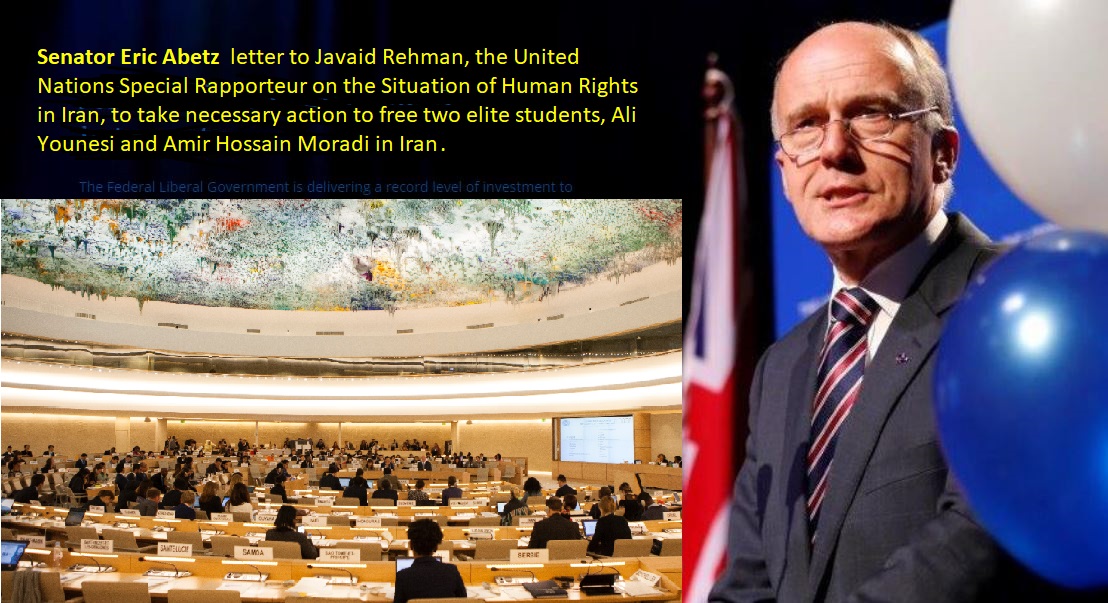 Australian Liberal Senator Eric Abetz wrote a letter to Javaid Rehman, the United Nations Special Rapporteur on the Situation of Human Rights in Iran, urging him to take necessary action and increase pressure on the Iranian regime to release two elite students, Ali Younesi and Amir Hossain Moradi, along with other youth and political prisoners.

Amir Hossein Moradi disappeared on April 10, and Ali Younesi was brought home in the evening of the same day with injuries and torture marks. Ali won the gold medal at the 12th International Olympiad on Astronomy and Astrophysics, held in China in 2018. Earlier, he had won the silver and gold medals of the National Astronomy Olympiad in 2016 and 2017. Amir Hossein also won the Olympiad silver medal in 2017. The Iranian regime’s Judiciary, after almost a month of secrecy, announced on May 5 that it had arrested these students. Shortly afterward, the People’s Mojahedin Organization of Iran (PMOI or MEK) announced the names of 18 other people who have been recently and secretly arrested by the regime.

Ever since the arrest of these human rights activists, many human rights organizations and renowned politicians from all across the world, such as Senator Abetz, have condemned the Iranian regime’s arbitrary arrest of these prisoners and demanded their immediate release.

The full text of Senator Abetz’s letter is as follows:

Organization have begun arresting and summoning large numbers of young activists, especially the families and supporters of the Mojahedin-e Khalq (MEK). The Iranian regime has also increased its persecution of Iranian religious minorities.

According to the National Council of Resistance of Iran, many have been sent to prisons and some temporarily released on bail while signing a form pledging not to participate in any anti-regime

activities. Among those arrested was Ali Younesi, described by Amnesty International as a “prisoner of conscience targeted solely for his family ties” and warning that he is “at risk of torture or other ill-treatment.”

The Iran Human Rights Monitor recently said in its monthly report for May 2020 that “While the Coronavirus has been ravaging in various provinces across Iran, the regime’s security and judicial apparatus have heightened their persecution of minorities and political and civil rights activists.”

I urge you as the Special Rapporteur on Human Rights in Iran to facilitate an Independent International Fact-Finding Mission in Iran to investigate the allegations of persecution against supporters of the MEK and other political and religious minorities.