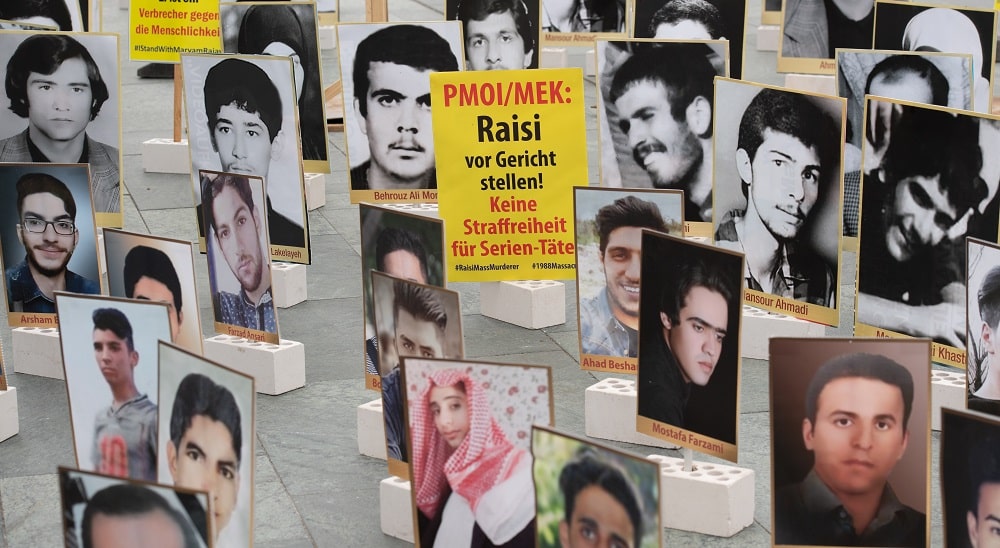 For the past month, Iran has averaged more than one execution per day, reinforcing concerns about escalating abuses of human rights following the installation of a mass murderer, Ebrahim Raisi as the genocidal regime’s president.

Raisi served two years as judiciary chief which coincided with a historic crackdown on the anti-regime protests of November 2019, which was another part of Raisi’s dark record of human rights that established since the 1980s, mainly in 1988.

At the start of 1988, Raisi was a deputy prosecutor for the capital city of Tehran. By June he had seized the opportunity to serve as one of four officials on a “death commission” that oversaw politically motivated executions in Evin and Gohardasht Prisons.

The ensuing massacre resulted in 30,000 lives, most of them members of Iran’s main opposition group that was explicitly targeted in a fatwa issued by the regime’s Supreme Leader Ruhollah Khomeini. Raisi has publicly defended his leading role in that massacre in recent years, even suggesting that Khomeini’s blanket death sentence for the People’s Mojahedin Organization of Iran (PMOI/MEK) was unquestionable and divinely inspired.

Raisi continued its human rights violations targeting dissidents after the 1988 massacre. For months after the November 2019 uprising, Raisi’s judiciary carried out a campaign of torture against those who had been arrested during and immediately after the uprising. But even as this torture was still going on, students and residents of more than a dozen provinces staged further demonstrations in January 2020, repeating the same calls for regime change that had defined the 2019 uprising and a similar movement in January 2018

To oppress Iran’s restive society, the regime’s Supreme Leader Ali Khamenei appointed Raisi as head of the judiciary. Raisi’s performance in that role demonstrated an ongoing commitment to the type of violent crackdown on dissent that he had embodied during the 1988 massacre. Now with Raisi and his administration, there would be an even greater threat to human rights.

The current execution rate seems to bear this out. Over 150 executions have been recorded since his mid-June election, at which time his deputy Gholamhossein Mohseni Ejei took over leadership of the judiciary. Ejei has his own history of human rights abuses. Thus, all the branches of government have now come under the control of mass murderers. The Iranian regime has never once relinquished its status as the country with the world’s highest per-capita rate of executions.

With more than two months to go until the end of the year, 2021 has already well-surpassed the total number of executions in 2020.
Over the past 10 years, the Iranian judiciary has reportedly been responsible for 70 percent of the known executions of juvenile offenders in all the world. The persistence of that practice despite constant international outcry is indicative of the regime’s sense of impunity in matters of human rights. That impunity stems from the lack of an international response to the 1988 massacre, and more recently from a similar lack of response to the 2019 crackdown and to the fact that a major perpetrator of both crimes was appointed president.

In a speech before an international teleconference in July, the Iranian opposition’s leader Mrs. Maryam Rajavi described Raisi’s selection as a “litmus test of whether [the international community] will engage and deal with this genocidal regime or stand with the Iranian people.”

In recent months, some renowned legal scholars who participated in that conference concluded that the fatwa behind the 1988 massacre communicated the intention of wiping out entire communities of faith that are opposed to the mullahs’ fundamentalism.

Also in that conference, Mrs. Rajavi underlined that the danger of Tehran trying to carry out this genocide would increase as the regime came under ever greater pressure from the domestic activist community. “In the new era” defined by the Raisi administration, she explained, “the hostility and enmity between the Iranian regime and society will intensify more than ever before.” The recent surge of executions is an early sign of this intensification on the side of the regime. Meanwhile, there are other signs of Iranians pushing back.