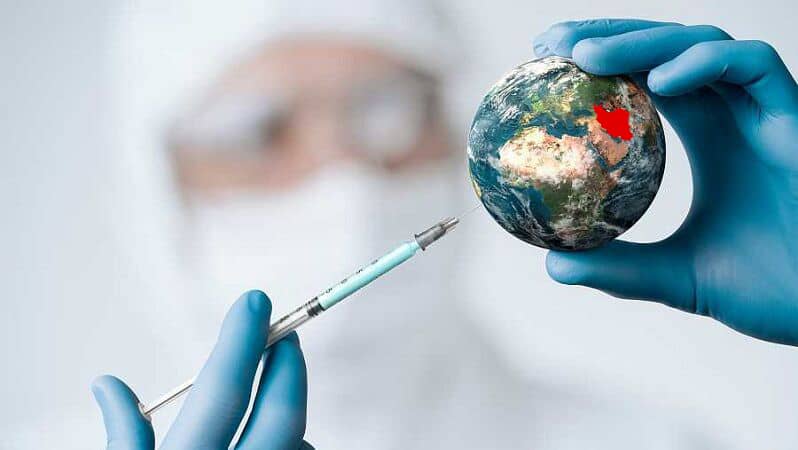 Meanwhile, according to the Statista website, there have been around 10 million people vaccinated in Iran’s neighboring countries, such as Turkey, Qatar, Kuwait, and other countries like Morocco and Serbia.

Yet, as “the coronavirus waves are raging” in Iran, according to Mohammad Reza Zali, head of Tehran’s National Covid-19 Combat Task Force, there is no news of vaccination in Iran, and the regime’s authorities are not showing they are in rush.

This is while, according to the spokesperson of the regime’s Health Ministry on February 20, Covid-19 and its new deadlier variants are “rapidly spreading.” Yet, according to the state-run Arman daily on Wednesday: “While global vaccination has been effective in the world despite the presence of the Covid-19 new variants.” Yet, as the Mostaghel daily wrote on Tuesday, the regime “is in no hurry to carry out vaccination.”

The regime, which tries to cover up its inhumane Covid-19 policy, uses its state TV to “produce programs against the global vaccination and [verified] vaccines such as Pfizer and Moderna. Even in these reports, IRIB is trying in an unbelievable way to introduce vaccination as harmful and aimless,” according to Arman daily on Wednesday.

Meanwhile, Iranians see what the state-run ISNA news agency on February 26 described as the ongoing vaccination process as the “largest vaccination campaign in history around the world, with 225 million doses of approved vaccine against Covid-19 in 100 countries.”

Thus, there is justified national demand in Iran for vaccination, and the state-run media sound the alarm of a possible social turmoil. “Iranians are not vaccinated, while even war-torn Afghanistan has imported 500,000 doses of the vaccine: Where are we in this equation?” wrote the state-run Mostaghel on Monday.

The regime’s officials, particularly the mullahs’ president Hassan Rouhani, try to deceive people and frighten them with the so-called “negative” consequences of vaccination, yet blame people for not “abiding by health protocols.”

“Intimidating and blaming people for not following the protocols is the only way our officials use in the face of the Covid-19 pandemic. Officials, who during the past year, have only made contradictory remarks,” read the Arman daily’s article on Wednesday.

While the regime’s supreme leader, Ali Khamenei, explicitly banned the import of certified vaccines, in what Amnesty International called a denial of Iranians’ “right to life,” which is a crime against humanity, other regime officials try to deceive the public by making contradictory remarks.

“The effects of vaccines are still not clear to us, they are ambiguous,” Rouhani claimed on February 27. While countries are racing each other in vaccination he bogusly claimed: “Many people around the world avoid vaccines.”

Meanwhile, the regime’s officials bragged about the vaccination of 50,000 people with the so-called domestic vaccine. But, seemingly, this is the third phase of the human experiment of a Cuban vaccine, that the regime and Cuba agreed to carry out in Iran.

The question now is whether these 50,000 people know that they are subjects to an experiment. If not, this is another crime against humanity and the international community should investigate it.

Why does the regime not carry out vaccination?

Iran’s vaccination crisis has no technical difficulties. The regime tries to blame sanctions, but that is not true, since Khamenei banned the import of certified vaccines. In addition, medications are not sanctioned.

The regime intends to continue its inhumane Covid-19 policy. The November 2019 uprising rattled the regime’s foundation. People stormed the centers of oppression and called for regime change. This uprising changed the domestic and international balance of power, with the international community hearing Iranian people’s voices calling for regime change, and that people do not want this regime.

Khamenei and his regime were able to momentarily oppress the uprising by killing 1500 protesters. The unresolved economic and social crises and the regime’s 40 years of oppression has turned the society into a powder keg. Signs of another uprising were extraordinarily strong by the beginning of 2020.

Then the Covid-19 arrived in Iran. The regime embraced it. Khamenei called this deadly virus a “blessing,” and the regime sent people to the Covid-19 minefields through systematic inaction, delay in announcing the virus’s arrival, and downplaying the crisis.
“The officials act in a way that they are missing the high Covid-19 mortality and infection rate. They do not expect to see the decreasing trend of casualties,” wrote the state-run Hamdeli on Tuesday.

Yet, the regime’s inhumane Covid-19 policy has increased people’s hatred toward the regime. As the state-run Jomhuri-e Eslami daily wrote on January 26, “[We] should fear the day when people’s patience ends, and they overrun [the regime].”

The recent uprising in Sistan and Baluchestan and daily protests in Iran by all walks of life despite the Covid-19 outbreak show the regime’s strategy has already failed.