IRGC Arrests Dozens of Children in Iran for Water Sporting 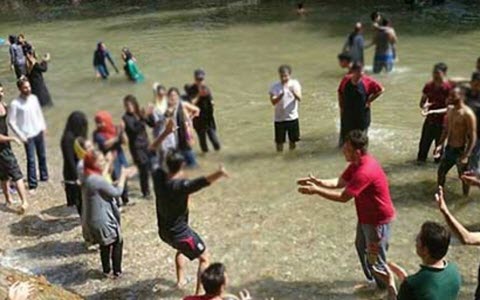 NCRI – The Iranian regime’s Islamic Revolutionary Guards Corps (IRGC) has arrested dozens of boys and girls who were on a leisure tour and mountain hiking near the town of Sepidan, in Iran’s Southern Fars Province.

The state-run Javan news agency on Tuesday, June 6, quoted Lieutenant Colonel Ruhollah Rostami, a commander of the local IRGC  in Sepidan Garrison, as saying that some 90 boys and girls who were taking part in a mixed-gender tour and mountain hiking were detained.

He said: “The Bassijis from the IRGC Anti-Vice Garrison, in coordination with the Judiciary, went to the heights at the village of Ardeshiri and arrested those individuals who were at leisure and taking part in water sports.”

He said that the tour guide only had a permit to take groups of people for mountain hiking and had registered a number of boys and girls, adding that the IRGC forces would take action against “those who disrupted the norms during the month of Ramadan.”

The regime routinely steps up its suppressive measures during the holy month of Ramadan.