Covid-19 Cases on the Rise in Northwest Iran Prison

The coronavirus outbreak in Ardabil prison has endangered the lives of prisoners.
A prisoner held at Ardebil Prison who was suspected of having contracted Covid-19 was taken to the city’s Khomeini Hospital on Wednesday, April 22. Two days earlier, the inmate had been taken to the prison’s clinic with Covid-19 symptoms. But he was only checked for fever and received a few common febrile medications. He was then directly returned to the ward where other inmates are being held.
On Monday, April 20, another prisoner from ward 14, also suspected of having the virus was taken to the hospital due to his deteriorating condition.

#COVID19 Cases on the Rise in Northwest #Iran Prisonhttps://t.co/fjMsX2llwQ

Protests reported in Tehran and other cities across Iran 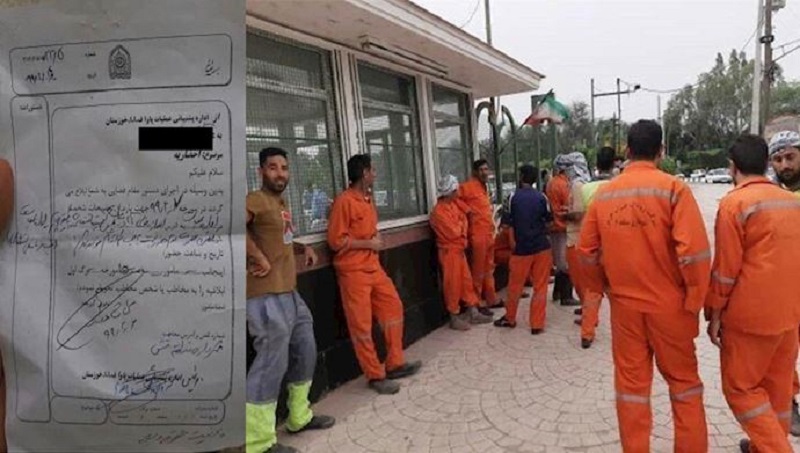 People from all walks of life are reported to be holding protest rallies in numerous cities throughout Iran despite the ongoing coronavirus pandemic crisis.

In Tehran, a group of drivers of the regime’s Khomeini International Airport parked their vehicles and held rallies outside the leasing company and the bank that provided the loans for their vehicles, demanding their monthly lease payments be postponed due to the current recession in the country’s airports and the decreasing number of flights and air travels.

It is worth noting that the drivers in this airport are not supported by the taxi drivers’ company and are under the supervision of the Road & Construction Ministry. They do not enjoy unemployment insurance, special fuel rations, or other such privileges provided for other similar workers.

Maryam Rajavi: The mullahs are enemies of Iran and Islam and cannot escape from the quagmire of disease and death with which they have afflicted the Iranian people

The mullahs are enemies of #Iran and Islam and cannot escape from the quagmire of disease and death with which they have afflicted the Iranian people – Speech on the advent of the Holy Month of #Ramadan #COVID19https://t.co/hoqyteIlkC pic.twitter.com/Q3nOYLOHWQ

The only path to salvation and freedom is for the Iranian people to take their destiny in their own hands. The people of #Iran and their valiant children will rebel against the #Coronavirus and they shall overcome. #FreeIran2020 https://t.co/hoqyteIlkC pic.twitter.com/OaxVvDjYH7

The hard conditions of the political prisoners add to the concern over the horrific statistics of Iran’s COVID-19 crisis.
A high number of prisoners in Evin, Fashafuyeh, Ghezel Hasar, Tabriz, Kermanshah and Urmia prisons have been affected.
While the virus is spreading, hygienic provisions and equipment, such as gloves, masks, and disinfectants are not available.
None of the infected prisoners have been quarantined or isolated either.
The People’s Mojahedin Organization of Iran (PMOI/MEK)’s network Obtained 3 documents from within the regime dated March 14 to April 9, 2020, from the National Emergency Organization.
Documents shows that 2 prisoners & a prison guards have been infected to COVID-19 in Evin and Fashafuyeh.

See more in the below video:

Tuesday, April 28, 2020, marks the 166th day since the beginning of the nationwide Iran protests.

Previous articleIran: Coronavirus Death Toll Exceeds 36,200 in 301 Cities
Next articleMaryam Rajavi’s Speech on the Advent of the Holy Month of Ramadan