Political prisoner writes to UN about mistreatment by Iran regime 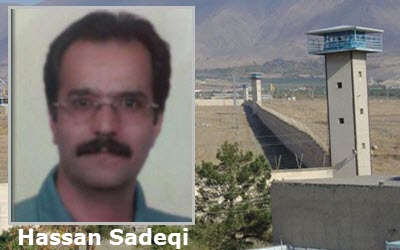 NCRI – Iranian political prisoner Hassan Sadeqi has sent a letter from prison to Ahmed Shaheed who is the United Nations special rapporteur on the human rights situation in Iran. It reads as follows:

June 30, 2016
My name is Hassan Sadeqi. I am a political prisoner at the Gohardasht Prison. I was also a political prisoner at Evin Prison during the years of 1982 to 1988. While in Evin Prison, I was beaten by cables while being interrogated. Because of the beatings, I was diagnosed for cataract disease (Katrkt) in my right eye. No one came to my rescue till my release in 1988. I sought medical help for my eye, but it was too late. I underwent an operation by Dr. Jahromi at the Royal Hospital in Tehran.

I was again arrested in 2012. I was imprisoned in solitary confinement in section 240. I was beaten by the interrogators. I suffered head injuries because of the beatings. In one of these beating sessions, I went into coma. When I regained consciousness, I found that I’d lost half of the sight in my right eye.

I was released on bail. I decided to go to Labaffi Nejad Hospital to see an eye surgeon. The doctors diagnosed my eye problem as glaucoma (glaucoma) and advised me to be monitored by a clinician. I am now in Gohardasht Prison, where I am sentenced to 15 years of unjust imprisonment. I have asked to see a doctor several times, but the prison authorities, including Haji Loo, the Judiciary representative, have rejected my request.

My right eye is on the verge of losing its sight completely. I am writing you this letter to bring the violation of the most basic rights of the prisoners in Iran. This is a corrupt regime, incapable of being moderate. Even if the court or the law allows me to be referred to a hospital for surgery, the Prison chief could block that order. This is a common practice in the prison.

This letter demonstrates the dreadful human rights situation in Iran. Things have only deteriorated under the current regime of the mullahs’ President Hassan Rouhani, and the plight of political prisoners like Hassan Sadeqi has worsened. Grisly public hangings, floggings, and forcible removal of limbs have become common-place punishments.

Hundreds of senior political dignitaries, parliamentarians, human rights and women’s rights activists, as well as religious leaders from the United States, Europe, and Islamic countries, will all come together on July 9, for “Free Iran”, in Paris. This major gathering of Iranians and their international supporters, under the leadership of Maryam Rajavi, will be held to emphasize the cause for democracy and freedom in Iran, and to highlight the plight of Iran’s political prisoners, like Hassan Sadeqi, who continue to suffer at the hands of the mullahs’ regime.