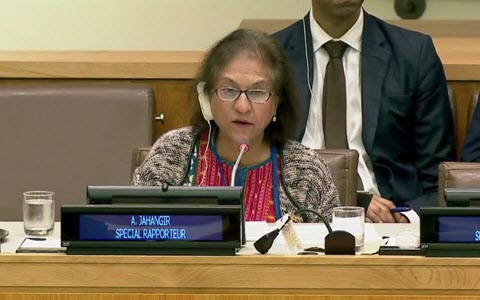 Asma Jahangir, who was addressing the General Assembly for the first time since taking the role in November 2016, delivered a report on the first six months of 2017 which was based on sources both inside and outside of Iran.

Jahangir explained that she was worried about the rate of executions in Iran, as well she should be. Currently, Iran has the highest execution rate per capita and is one of the few countries to still execute juvenile offenders, in clear violation of the UN’s Rights of the Child charter.

She said: “I am concerned by the rate of executions in Iran. Reports indicate that since the beginning of the year 435 persons have been executed…At least four juvenile offenders were executed, and 86 more are known to be on death row, although the actual figure may be higher. I take the opportunity to reiterate my request for a list of all juvenile offenders on death row and reiterate my appeal to the Iranian authorities to urgently abolish the sentencing of children to death, and to engage in a comprehensive process of commutation of all death sentences issued against children, in line with juvenile justice standards.”

Jahangir also expressed concern about the death sentence levied against spiritual leader Mohammad Ali Taheri for so-called corruption on earth- an exceptionally vague charge which the mullahs use when you haven’t actually committed a crime but they want to punish you anyway.

Taheri’s trial is believed to have violated several international standards including due process and coercion of witnesses. As such, Jahangir called for his conviction to be overturned.

Jahangir also raised the worrying issue of torture, corporal punishment, and the denial of medical care to coerce confessions and punish people, which violates human rights law and international standards of justice.

She said: “I regretfully note that amputation, blinding, flogging, and the continued use of prolonged solitary confinement continues to be regularly practised. I am also deeply concerned by consistent reports of the denial of access to proper and necessary medical treatment of detainees, including the deprival of medical care as a form of punishment.”

Many political prisoners have gone on hunger strikes to protest the dismal conditions they are being kept in and the Regime refuses to allow them access to sorely needed medical care.

While on the topic of political prisoners, it is important to discuss the routine detention of human rights defenders, journalists, religious minorities, ethnic minorities, and political campaigners for freedom of expression and peaceful activism.

As of June 2017, no less than 26 journalists/bloggers had been arrested and/or sentenced for exercising press freedom. Many more had been harassed and/or intimidated by the Regime through interrogation, surveillance, amongst other things.

Jahangir even spoke to those working at the BBC Persian Service who had been harassed by the Regime and told that if they continued working their relatives would be targeted and their assets would be frozen.

She said: “They all sought private meetings for fear of the consequence of being identified as having provided information to my mandate.”

Another worrying trend is that of the imprisonment of dual nationals, like UK charity worker Nazanin Zaghari-Ratcliffe, who have been accused of spying for Western countries and sentenced to many years in jail.

This persecution of ordinary Iranians based on their political beliefs is not a recent phenomenon but is well ingrained in the Iranian Regime’s DNA.

In 1988, the Regime slaughtered over 30,000 political prisoners in just a couple of months. They buried their bodies in mass graves, refused to tell the families what had happened, and attempted to hide their “crime against humanity” from the rest of the world.

Despite recent acknowledgements of the genocide from the highest-ranking members of the Regime, the international community has still been largely silent and this silence must end.

Jahangir said: “The families of the victims have a right to remedy, reparation, and the right to know about the truth of these events and the fate of the victims without risking reprisal. I therefore reiterate my call upon the Government to ensure that a thorough and independent investigation into these events is carried out.”

As you can imagine, women in Iran are routinely oppressed by the Iranian Regime, whether its mandatory dress codes, banning women from attending sports matches, arresting people from reading and sharing feminist literature, excluding women from certain occupations, or many more misogynistic things.

Jahangir said: “I call upon the Government to address these concerns in practice, and in legislation through ratifying the Convention on the Elimination of All Forms of Discrimination against Women and to repeal all laws and policies that discriminate against women and girls.”

Jahangir paid tribute to the many human rights defenders who have risked their lives to speak to her about the situation in Iran.

Even those living outside Iran fear reprisals from the Regime’s many terrorist proxy groups or that their family will be targeted by the Iranian Revolutionary Guards Corps (IRGC).

Previous articleIran: Collective Execution of 7 Prisoners
Next articleApproved Legislation to Sanction Clerical Regime for Its Ballistic Missile, a Necessary Step to Confront Terrorism