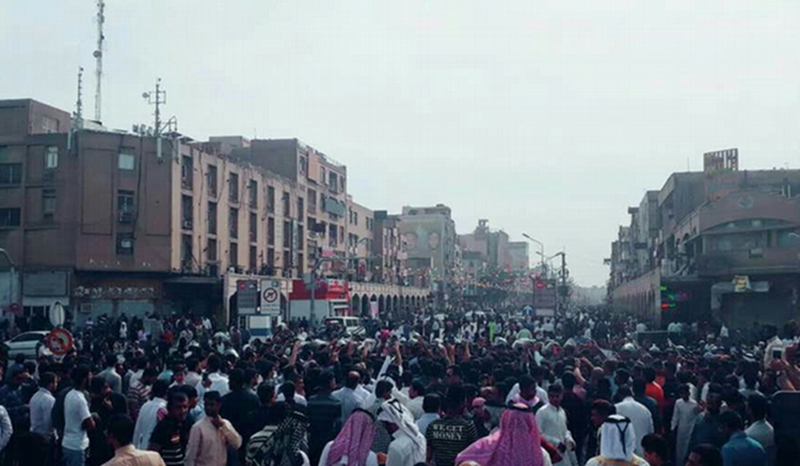 Following last month’s protests in Ahvaz and other cities across Iran’s Khuzestan province, hundreds of Ahvazi Arab compatriots are still being kept in detention without standing trial.

The recent protests in the city erupted following a state TV program. Considering the program as an attempt to eliminate Arab residents from the province’s demography, the protesters held weeklong protest rallies in different cities across the province, including the capital Ahvaz.

Many protesters were arrested during the protests. Although no official figures on the number of arrests have been released, but some human rights activists say that more than 500 of Ahvazi Arabs and activists have been arrested.

Regime’s Ahvaz MP has meanwhile confirmed the arrests, but says the number of detainees is around 150.

Families of a number of detainees have held gatherings in front of Ahvaz’s Shayban Prison, offices of regime’s Assembly of Experts and MPs, and Khuzestan’s provincial government building, protesting about their children’s uncertain situation.

The story of a detained taxi driver

Reza is a taxi driver. Detained during the recent wave of arrests in Ahvaz, the young man was kept in prison for 22 days.

“I was just back from Friday market and wanted to change my car’s oil. I left the car in an auto repair shop and then went to buy the oil when I noticed people gathering on the street,” describes Reza how he was arrested.

“Security forces were chasing a number of young people who were just passing by while I was just watching. Suddenly I felt pressure and a heavy blow that caused me to fall down to the ground. I was then circled by security forces who were beating me and forced me into a police van, without allowing me to say a word,” Reza adds.

The taxi driver says he was too shocked and unable to resist, saying “I was blindfolded and taken aboard a bus. The bus didn’t move for about an hour, waiting to be filled with other detainees.”

Reza says he didn’t know where the bus was headed to, but when his blindfold was removed he saw a big detention center with lots of detainees.

He says that per his counting the number of detainees was 200, adding “all detainees were standing as there was not enough room for sitting down. It was too hot and there was a very bad smell in the detention center.”

“We were kept inside the unknown detention center until the next day and then they transferred us to Ahvaz Shayban Priosn. The situation in the prison was no better either, so that every four detainees were given a bowl of yogurt and a few dates as food. Besides, new detainees were added on a daily basis,” Reza adds.

The taxi driver, who says he’s not been involved in any political activities, nor has he participated in any rallies, adds “I was repeatedly interrogated in the prison while being beaten each time, uselessly telling them that I was mistakenly arrested.”

After 22 days, Reza’s name comes up. Prison official tell him the court has ruled to release him on a110-million-toman bail.

“My family bailed me out the same day,” says Reza.

Anyone who dares to follow up will be arrested as well!

Meanwhile, Saeed Fakhernasab, a well-known Ahvazi civil rights activist and the former head and deputy head of Shadegan and Ahvaz district one education departments, respectively, was arrested on April 19 and taken to an unknown location after he had some meetings with members of regime’s Assembly of Experts, MPs and the province’s high-ranking officials while pursuing the cases of protesters detained in recent Ahvaz unrests.

Following the deterioration of Fakhernasab’s health conditions and his transfer to Baghaei hospital, branch 12 of Ahvaz Revolutionary Court contacted Fakhernasab’s family on April 25, informing them that Saeed could be released on a 500-million-toman bail before the court issues his sentence.

Speaking under the condition of anonymity, the activist adds “we’ve been informed that random arrests have taken place to a great extent.”

The activist then points to arresting Iranian ethnic Arab political and civil rights activists, saying “activists and elites who didn’t even take part in the protests nor had a role in them were arrested and faced with heavy cases, with some of province’s high-ranking officials ‘settling political accounts’ with the detainees also playing a part in this regard.”