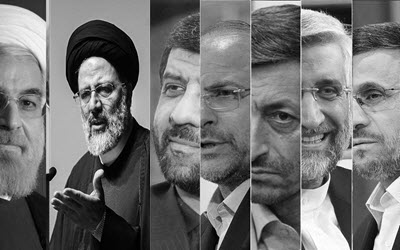 NCRI – The U.S. attack on the Shayrat airfield in Syria immediately showed its impact on Iran’s presidential election. Various factions are attempting to take advantage of this development, turning it to their favor and against their rivals.

“Today, more than ever before, we must unite because it is not clear what visions the people in power now in the U.S. have for the region and the world. We must be very aware and plan very carefully, to be ready for a variety of probabilities. Good elections are the power of Iran and our nation…,” Iranian President Hassan Rouhani said in his remarks on Saturday.

Iran’s state TV, controlled by the faction loyal to Iranian Supreme Leader Ali Khamenei, censored these remarks from Rouhani’s speech. But why? The answer can be found in an article published by the Kayhan daily, known as Khamenei’s mouthpiece.

“A Western leaning current (referring to Rouhani’s faction) that has no achievements to boast about, legitimize their continued presence by claiming the possibility of a U.S. attack is very serious if others come to power and are not willing to engage with the U.S.,” the piece reads.

This is a look at the remarks made by Rouhani’s faction.

“If Iran resorts to adequate political statements and refrains from providing pretexts to [U.S. President Donald] Trump, the government will be able to contain Trump’s America,” according to the Arya website.

“Iran’s opponents seek a quick and emotional response by us to events such as the U.S. missile attack against Syria. However, Iran understand what its opponents are after and should prepare itself from within against foreign threats,” according to the Aftab News website. “No doubt this is why the Americans have scheduled their next measure against Iran after the May presidential election.”

“[The U.S. attack on Syria] is a type of message meant to create a climate of fear, that with Trump in the White House all forecasted predictions have changed and the results will be changing. The necessary individuals able to prevent such developments must be elected,” according to the Tasnim news agency, affiliated with the Revolutionary Guards Quds Force.

Both viewpoints have a similar perspective that the U.S. attack on Syria was a blow that rocked both of Iran’s factions, further fueling their political disputes. The main issue at hand is that the Iranian regime in its entirety has suffered a major blow after this unprecedented development.