In Iran, hopes fade for surge in the economy 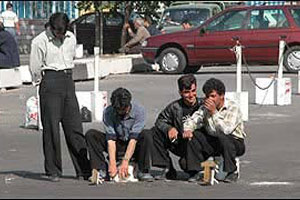 More than six months after Rouhani took office, hopes of a quick economic recovery are fading among ordinary Iranians, business owners and investors, while economists say the government is running out of cash, The New York Times reported.

“With the start of the Iranian new year, on Friday, the government will begin phasing out subsidies on energy, the start of a process that will send the prices of gasoline and electricity, and other utilities, soaring by nearly 90 percent, economists say.”

“The shortage of funds is also forcing the government to wind down a system of $12 monthly payments to nearly 60 million Iranians, with only the poorest eligible to reapply.”
“Most people fear that prices will shoot up when subsidies are cut in the new year. “Already nobody is coming to the beauty salon” where she used to work, Mr. Farshi’s wife said, adding that she had been unemployed for the past year. “They are blow-drying their hair at home because they can’t afford to pay for it any longer.”

“For the first time since the elections, the government was forced to sell dollars on the open market this month to support the rial, insiders say. Government spokesmen, trying to play down the significance of the rial’s fall, say the decline in the currency’s value is the result of a seasonal rise in demand for foreign currency tied to the New Year holiday.”

“Adding to the turmoil are the subsidy cuts — a step that most economists say is inevitable and necessary. Earlier, when gas prices were raised and rations imposed in 2007, protesters set fire to more than a dozen gas stations. The last time fuel subsidies were cut, in 2010, gasoline prices nearly quadrupled in Tehran.”

Even those close to the Rouhani administration are saying they are hoping for a “miracle” to avoid the political damage from the cuts, the report said.

Previous articleAli Khamenei: Holocaust is an event whose reality is uncertain
Next articleSenior U.S. Congressman says Iranian regime up to ‘no good’ with U.S. aircraft carrier mock-up