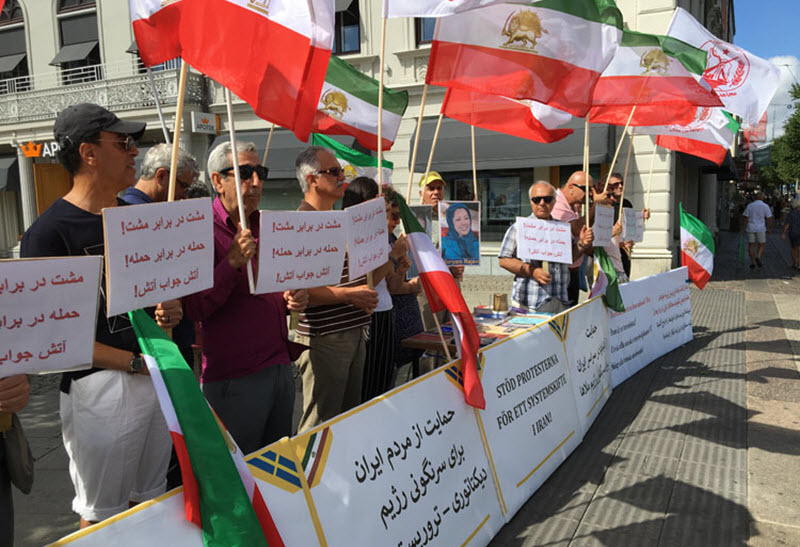 Iranians in Canada and different European countries, expressed their solidarity wth the protesters and uprisers in Iran, by holding rallies and demonstrations. The latest of this series was held in Amsterdam, Gothenburg,Vienna, Toronto, Copenhagen, Ottawa.

VIENNA, Austria. A number of the supporters of Iranian Resistance, expressed their solidarity with the uprising inside Iran by holding a demonstration in city center, they carried banners reading: I will overthrow the regime.

MONTREAL, Canada. Supporters of the Iranian Resistance expressed their solidartiy with the uprising of the Iranian people by holding a gatheing in the city center.

COPENHAGEN, Denmark, Supporters of the Iranian Resistance, held a demonstration in the city center and expressed their support and solidarity with nationwide protests in Iran, they chanted: The slogan of every Iranian is, Death to Khamenei and Rouhani.

Previous articleEditorial: Will Negotiating With the United States Do Iran Regime Benefit or Harm?
Next articleGOHARDASHT, Karaj: people chant: ” Shame on you Khamenei, let go the country”, Aug. 4

The United States authorities arrested Kaveh Lotfolah Afrasiabi, one of the Iranian regime’s agents, posing as an independent political scientist, on Monday at his...
Read more
Iran Opposition & Resistance

Iranian Propaganda Operates Freely in the West, With Sources Both Overt and Subtle

On Tuesday, a so-called political scientist by the name of Kaveh Lotfolah Afrasiabi made his first appearance before a US federal court after being...
Read more
Iran Opposition & Resistance