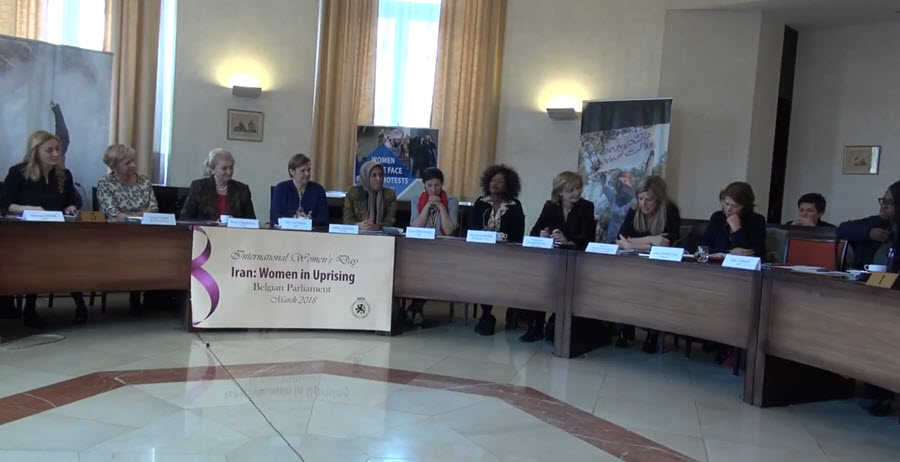 On Tuesday 6 March 2018, a meeting was held in the Belgian Parliament to commemorate the International Women’s Day and in solidarity with Iranian women.

Many speakers endorsed the struggle of Iranian Resistance for democracy and women’s rights under the leadership of opposition leader Maryam Rajavi.

Women in Iran have been in the frontline in the fight against Islamic fundamentalism which the theocratic regime imposed on the Iranian society by hijacking the 1979 revolution. They have kept the freedom movement alive through all these years with great courage and enormous personal sacrifice. Thousands of women, including girls as young as 15 or 16, as well as pregnant women have been executed by this regime for refusing the theocratic rule.

During the years of the presidency of Hassan Rouhani, at least 82 women have been hanged.

Despite the fact that more than half of the country’s university graduates are women, there is no female minister in the cabinet of Rouhani and women’s presence in Iranian Parliament is only 5.8 percent. The Iranian regime ranks 140 in a list of 144 countries, according to World Economic Forums Global Gender Gap Report 2017.

Since we have an Islamic fundamentalist dictatorship in Iran which is by nature based on humiliation of women, the campaign for women rights can achieve its goals only when we have a change of regime in Iran. The recent uprising also confirmed that the people of Iran do not believe in this so-called reformist-hardline game. They want a complete change.

The Iranian opposition PMOI and the coalition of (NCRI) are led by women. It was interesting to hear that the Iranian regime blamed this opposition to be responsible for leading the recent protests. The European governments, including our government in Belgium, as well as the EU, should play a more active role in supporting Iranian people’s struggle for freedom. Our relations with Iran must be conditional on improvement of human rights, women’s rights and to a halt to executions.

Previous articleSecurity Forces Brutally Raid Women’s IWD Gathering in Tehran
Next articleIran: Strikes and Protests of Workers, Farmers, Nurses, Merchants and Looted People in the Four Corners of the Country