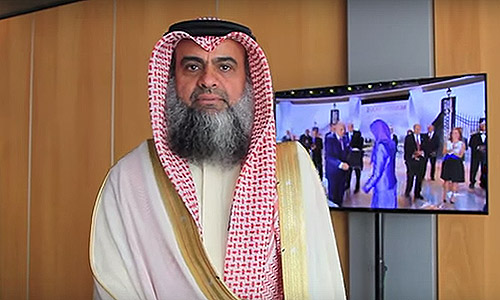 NCRI – In an interview with ncr-iran.org, Mr. Jamal Ali Jassim Bu Hassan, a Member of Parliament from Bahrain, has accused the Iranian regime of masterminding the deadly terrorist attack last week in Bahrain.

The bomb attack outside a girls’ school in the village of Sitra in Bahrain last week left two policemen killed and six wounded. Prime Minister Sheikh Khalifa bin Salman al Khalifa has alleged that there was a foreign role in the attack. Bahrain’s interior ministry has said the explosives used in the attack resembled some seized days earlier, when authorities claimed they had foiled a plot to smuggle in arms and explosives from Iran.

The following is the text of our interview with Mr. Bu Hassan:

1. Who was responsible for this latest attack? Was a foreign state involved?

No doubt the explosion in Sitra was a cowardly terrorist act by a terrorist group trained and supported by the Iranian regime. This regime props up terrorism in various forms in the Gulf and Arab countries. This is a fundamentalist, fascist and cruel regime that is greatly isolated because of such irresponsible acts and its disrespect for its neighboring countries by meddling in their internal affairs and its export of terrorism and fundamentalism to the world.
2. How is the international community confronting the Iranian regime’s meddling in Bahrain and other regional countries?

Unfortunately, the international community’s position regarding Iran’s meddling in Bahrain and other Arab countries has emboldened the clerical regime to overtly interfere in these countries. This has led to humanitarian, economic and political crises. Had the international community stopped this suppressive regime in Iran, we would not have gotten to this point and I am urging the world community to take action by imposing obligatory and severe restrictions on this tyrannical regime.

3. What is your position on the Arab coalition that has been formed to confront the occupation of parts of Yemen by the Houthi rebels that are supported by the Iranian regime?

The Arab coalition, or the Decisive Storm, created by the Custodian of the Two Holy Mosques King Salman bin Abdulaziz was a strong slap in the face of dictator Khamenei at an opportune time to end the bullying of this fascist regime and its aggressions. We hope that this policy continues until the Iranian regime retreats to within its borders and quits harassing Muslims.

4. What is the role of Iran’s main opposition People’s Mojahedin Organization of Iran (PMOI/MEK) internationally to end the Iranian regime’s nefarious activities in the region?

The Iranian opposition led by the PMOI and headed by Mrs. Maryam Rajavi has an important and key role in the formation of an international front to stop the activities of this suppressive dictatorship ruling Iran and to topple the mullahs in Iran. We are sure that with Mrs. Rajavi’s leadership and the Iranian opposition, that is the legitimate representative of the people waiting [for change] in Iran, this overthrow will come about for the people that are suffering under the Iranian regime’s fascism.

Previous articleIRAN: Brutal sentence of amputation of leg and hand of two prisoners in Mashhad prison
Next articleIran: 109 years of unrelenting struggle for liberty

A bipartisan resolution co-signed by 113 members of the United States House of Representative, calling for a democratic, non-nuclear, and secular Iran, and condemning...
Read more
Iran Opposition & Resistance

Iranian Intelligence Minister Mahmoud Alavi recently delivered remarks to state media in which he admitted that if it was “pushed” by Western adversaries, the...
Read more