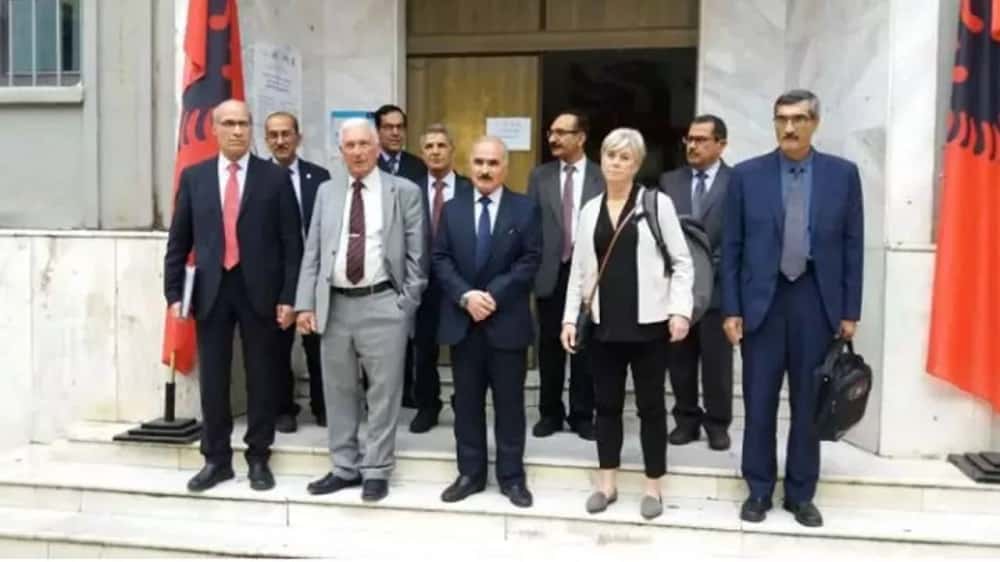 “When he finished reading the names, he laughed and said, ‘This is the Ashura of the MEK. Go, it’s the repeating Ashura of the MEK,” Hossain Farsi testified at Hamid Noury’s trial on Wednesday.

Wednesday marked the fortieth session of Hamid Noury’s trial, and an Iranian prison official was charged with participation in the 1988 massacre of political prisoners. Noury was in Gohardasht prison at the time of the massacre. In 2019, he was incarcerated in Sweden.

The last six sessions of Noury’s trial have been held in Albania. The location of the trial was transferred after 34 sessions in Sweden to Albania per prosecutors’ requests, where there are thousands of members of the Mujahedin-e Khalq (MEK). The MEK members were the main target of the 1988 massacre of over 30,000 political prisoners across Iran.

On Wednesday’s session at the District Court of Durres, Hossain Farsi, a former political prisoner and a MEK member, shared a harrowing account of the regime’s atrocities in prisons. Farsi spent twelve years in prison. He is one of the survivors of the 1988 massacre.

On July 29, 1988, Farsi and other prisoners in the section 7 of Gohardasht were taken to a corridor on the third floor. ““There was a table in the hall and the guards were sitting around it. I saw Nasserian [Mohammad Moghiseh], Hamid Abbasi [Noury], and three other guards,” Farsi said. “Nasserian was asking questions and others were just looking. When I approached him, he asked my name and said, ‘do you demand pardon?’ I said no. There I saw Abbasi [Noury] and other guards laughing. Nasserian told me to leave.”

“The next day, they took us to the first floor through the kitchens staircase. When I got there, several prisoners were sitting on the floor blindfolded,” Farsi said.

““I couldn’t see anything but the wall. About two hours later, a guard tapped on my shoulder and said, ‘Come.’ When I got up, I saw a door. It was the door to the court assistant’s office. Two guards were standing in front of it with Uzi guns,” he added.

“Around noon, a prisoner asked me, ‘Did you go to court?’ and another suddenly told him, ‘Don’t say court!’ I don’t know who they were,” Farsi said.  “I was kept in the hallway until 3 pm when Nasserian tapped me on the shoulder and said, ‘Get up and come.’”

He was taken to a room. “In front of me were two clerics and a plainclothes agent,” Farsi said. “One of the clerics was [Hossein Ali] Nayyeri. I knew him. On his right was another cleric that I didn’t know. On his left was Morteza Eshraghi, the prosecutor. I knew him too.”

Farsi was taken to what later became known as the “Death Commissions.” These commissions were tasked to identify the MEK supporters and sentence those who refuse to disavow from the organization to death. The “Death Commissions” implemented a fatwa by the regime’s then-Supreme Leader, Ruhollah Khomeini, who had condemned all MEK members to death.

“There was a paper in front of Nayyeri. He asked me to tell my name and charge,” Farsi said. “Unfortunately, I didn’t have the courage of my friends to defend my ideals,” he said while running into tears.

“They gave me a piece of paper and told me to write some things down. I went out of the room and wrote it down and gave the paper to Nasserian.”

He was then taken back to the corridor, which later became known as the “Death Corridor.” This corridor was where prisoners were held in Gohardasht before going to the Death Commission or be sent to the gallows.

“There I met some other prisoners.” One of the prisoners told Farsi that he had witnessed “this morning, they executed 20 prisoners, including the inmates that had been transferred from Mashhad.”

“Everything fell into place at that moment,” Farsi said. “I told Mojtaba [the other prisoner] they will execute everyone. He asked why? I said the people in the room, one of them was the prosecutor and the other one was a religious judge.”

While in corridor Farsi sees his inmates who had bravely defended the MEK ideals. “I saw one of my friends, Mahmoud Meymanat. I asked him, ‘What did you say in the room?’ he said, ‘I told them I am the MEK supporter, and Nayerri told me you should’ve joined your [executed] brother years ago, get out of the court.’”

“At around 10 pm, they told the rest of the prisoners to get up—we weren’t more than 20—and took us to the second floor of the building,” Farsi said.

“On July 31, Abbasi [Noury] and Nasserian came to my cell. Nasserian stepped forward and kicked me and said, ‘I’ve recorded everything you’ve said to your mother, including telling her to go to Iraq [where MEK had bases], and I’ve put it in your file. You will be executed,’” Farsi said.

“On August  1, I heard a lot of noises. After a while I realized a prisoner has been brought to my adjacent cell,” Farsi says. That prisoner told Farsi through morse code about the execution of Amir-Mehran Bigham and Mosa Karim-Khah.

“The guard took me to the third floor and told me to enter one of the rooms. When I went inside, I saw a guard whom we called Tabrizi,” Farsi said. “He came and started beating me. Two other guards were also beating me from behind. I was holding my hand in front of my face to avoid the blows. I was on the ground, and they continued to beat me. They wanted me to insult Massoud and Maryam Rajavi. I didn’t comply and they continued to beat me. I don’t know how long the beating continued. Finally, one of them pulled and threw me into one of the cells.”

On August 10, Nasserian comes to Farsi’s cell holding the paper he had written on the first day.

“He threatened to execute me and said, ‘Tell me how you communicated with the MEK in Ward 7 and how did you listen to the Radio Mojahed program. We will execute you. We executed your brother in Evin a few days ago and left your mother grieving. She will grieve over your death too, and your leader Massoud Rajavi will grieve over all your deaths,’” Farsi said.

“On August 13, I was blindfolded and taken to the Death Corridor. There were many prisoners in that corridor, and many others in the corridor of the courtroom,” Farsi said.

According to Farsi, around noon Noury and two other guards came and read the names of around 20 people.

“When he finished reading the names, he laughed and said, ‘This is the Ashura of the MEK. Go, it’s the repeating Ashura of the MEK.’ And then he took them to the [Death Hall]. The rest of us returned to our cells,” Farsi said. Ashura marks the day on which Husayn ibn Ali, the grandson of the prophet Muhammad and a member of the Household of Muhammad were killed.

Farsi was taken to the Death Commission on August 13.

“On that day, they were five people. Three of them were Nayyeri, [Mostafa] Pourmohammadi, and Eshraghi. One of them was Fatehi, a prosecutor of Karaj, and the other was Naderi, another prosecutor from Karaj,” Farsi said. “They told me you were supposed to write something. I said I already did. They said that there was no paper. Nayyeri told me to go and write whatever it was that you were supposed to write and told Nasserian to take me away. I went and sat and wrote it down.”

He was again taken back to the Death Corridor. According to Farsi, all prisoners in the corridor “knew what was going on and what was happening.”

“Around 10 pm, Nasserian and Noury came and read out a list of names and took them for execution,” Farsi said.

“After that, they took me back to the cell. I stayed there until early September,” Farsi said. “The Marxist prisoners who were in the adjacent cells were then taken to the Death Commission.”