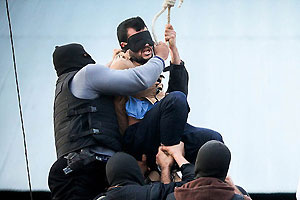 NCRI – Nine more prisoners hanged in Iran, including three in public as the wave of executions continues under Hassan Rouhani.

Three men were put to death in the city of Bonab in the East Azarbaijan province on Wednesday morning.

On the same day, another group of five prisoners were hanged in Adelabad Prison in southern city of Shiraz that has not been announced by the regime.

The hanging followed the execution of a 26-year-old prisoner in the city of Torqabeh, in north-east Iran, on Monday. The prisoner was identified only with his initials of M.S.

At least eight prisoners have been hanged in public since the beginning of the New Year in Iran.

More than 1,200 men women and children have been executed in Iran since Hassan Rouhani became president in July 2013.