IRAN: 92 arrested in restaurant during Ramadan 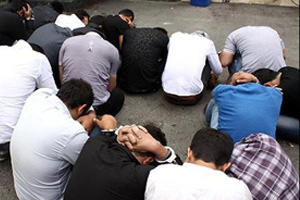 NCRI – Iranian security forces have raided a hotel restaurant and arrested 92 young men and women for eating and drinking ‘in public’ in the month of Ramadan.
The hotel in the northwestern city of Tabriz was raided on Monday. The restaurant manager along with 41 girls and 51 boys were arrested.

Ali Esmaeelpour, a senior state security forces official in the city, confirmed the arrests. Those detained were referred to the regime’s judiciary for sentencing.

Anyone in Iran caught eating or drinking in public during daytime in the month of Ramadan may receive 74 lashes in addition to a jail term of up to two months, judiciary officials of the regime have threatened.

Dadkhoda Salari, the prosecutor general in the city of Kerman, said last week: “Any individual who eats or drinks in public places could face a prison term of from 10 days to two months and 74 lashes,” the state-run Mehr news agency reported.

Another state-run news agency warned the public that special patrols have been stationed at streets and public parks in Tehran during the Ramadan to “deal with” those who drink, eat or smoke in public.

Last year hundreds of Iranians were lashed in public under the medieval laws of the religious dictatorship.

At least 200 people were flogged last year in the Iranian province of Qazvin for eating in public during Ramadan.

Last year Qazvin official Ismail Sadeghi-Niaraki acknowledged the scale of medieval punishments being carried out in the province by the regime under the rule of so-called ‘moderate’ president Hassan Rouhani.

He said: “[During Ramadan], 400 people were arrested and some were given warnings. Another 200 had their cases reviewed by the judiciary and the flogging sentence was carried out within 24 hours of their arrest.”

Last year, a Christian man in Iran had his lips burnt with a cigarette for eating during the day in Ramadan. The savage punishment was carried out in public in the city of Kermanshah.

Iran: Strike by Parsian Oil & Gas Workers in Lamerd and...

Secretariat of the National Council of Resistance of Iran (NCRI) - 21st October 2020
On Tuesday, October 20, 2020, workers at the Parsian natural-gas processing plant in Lamerd, Fars Province, went on strike for the fourth straight day....

Prices of Bread, a Staple Food Item for Majority of Iranians,...

Secretariat of the National Council of Resistance of Iran (NCRI) - 21st October 2020
In recent weeks, the price of bread, a major food staple for the overwhelming majority of the Iranian people, has jumped 30% to 100%...